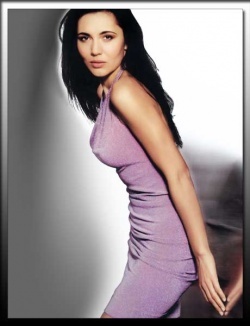 Bulgarian actress, Michelle Bonev, who has been living in Italy for years, stired a scandal with her movie “Farewell to Mom.” Photo by michellebonev.com

Bulgaria's Prime Minister, Boyko Borisov, is not at all considering the dismissal of Culture Minister, Vezhdi Rashidov, over the latter's trip to the Film Festival in Venice in September.

On Tuesday, the opposition Members of the Parliament from the Bulgarian Socialist Party (BSP) declared they were submitting a complaint with the Anti-corruption Committee against Rashidov, and asked for his resignation over what they call a "scandalous trip" along with amendments to the Film Industry Act, which release the State from obligations to subsidize filmmaking in the country.

In an interview for the TV channel Nova Televizia, Borisov said Rashidov was simply misled to go on this trip and he would not even comment on a possible resignation, giving his Minister high marks for "quietly" carrying out the theater reform.

The PM stated he was hopeful the additional BGN 10 M he would give to theaters would calm down actors and directors, adding he will let Rashidov do his work in peace.

"I am sorry, I think Ms. Bonev's looks might have lowered his self-preservation instincts, and he failed to check in detail, who and how exactly invited him. I think Rashidov learned his lesson and would not repeat the mistake," Borisov pointed out in connection with the scandal surrounding Bulgarian-born actress Michelle Bonev in Italy.