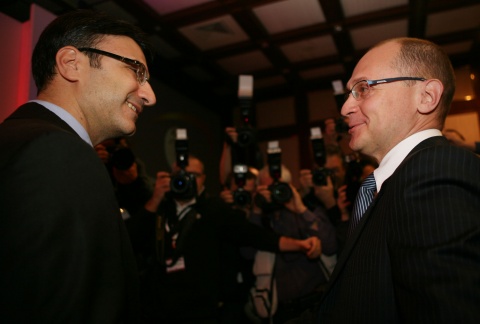 Bulgaria, Russia and third parties signed crucial memorandums on the creation of a company to construct the Belene NPP, committing to the project whose fate was not clear up to now.

The first of the agreements signed Tuesday night in Sofia is between Bulgaria's National Electric Company NEK and Russia's state company Rosatom, the parent company of Atomstroyexport.

It provides for a maximum fixed price of the Belene NPP by 2016, when the first of its two 1000 MW reactor is supposed to enter into operation, of EUR 6.298 B. NEK will have a majority stake of 51% in the Belene nuclear plant.

Of the other two memorandums, the first was signed by Russian Rosatom, the National Electric Company (NEK) and Finnish company Fortum, the other by Rosatom, NEK and French company Altran Technologies.

French engineering consulting company Altran Technologies will for now own 1% of the project company.

Finnish energy company Fortum VP Anne Brunila confirmed for Novinite.com (Sofia News Agency) that for now Fortum will stay at just 1% of the equity in the project.

Rosatom will be in the possession of the remaining shares of the Belene NPP project company.

The potential share in Belene of Serbia, which has expressed interest in acquiring a share of 5% to 10%, was not mentioned on Tuesday; for the time being, it remains unclear if Serbia will have a share, and what it will be in percentage terms.

The project company itself is supposed to be establish within 4-5 months.

The news that a contract is imminent was first broken Tuesday afternoon by Rosatom President Sergey Kiriyenko after he had a 30-min talk with Bulgarian PM Boyko Borisov.

Kiriyenko estimated that construction of the first unit of the new NPP will start within 10 months.

The price of Belene - which is the major point of contention between the Bulgarian and Russian sides - is yet to be determined, said the Rosatom president.

Kiriyenko suggested that the final price will be determined once specific investors have committed to the project, for he considered the price to be up to their decision.

All three memorandums on the Belene Nuclear Power Plant signed Tuesday in Sofia are non-binding, and their goals is to provide a framework for the final binding agreements, Bulgarian Economy and Energy Minister Traikov explained.

This development comes only hours after a fresh brawl on the price of Belene erupted at the energy forum held in Sofia on Tuesday, in which the Bulgarian PM accused the Russians of misleading on the price of the project.

At the "Energy without Frontiers" forum Tuesday, Bulgaria's PM Borisov said that he would negotiate with Kiriyenko only if he admits that Russia made a mistake and misled Bulgaria by announcing four years ago that the project would cost EUR 4 B.

Bulgaria's Minister of Economy and Energy Traicho Traikov on his part intimated that his country could as well do without the Belene NPP.

Initially the Russian side refused to comment, but after that Kiriyenko admitted that Rosatom had made a mistake by not specifying exactly how much and under what conditions the price of the project can be raised.

Kiriyenko had also announced that Rosatom is ready to provide the new Bulgarian NPP with fuel for its whole life of exploitation of 60 years.