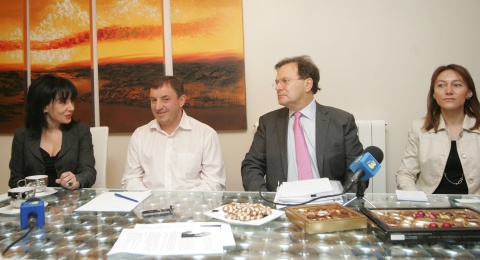 Sued Bulgarian businessman Aleksei Petrov (2L) with ex-England Attorney General Lord Peter Goldsmith (2R), who has agreed to counsel him, at a press-conference in Petrov's home. Photo by BGNES

Ex-England Attorney General Lord Peter Goldsmith has been recruited to counsel controversial Bulgarian businessman and ex-secret agent Aleksei Petrov, who is being sued on serveral counts of high-profile criminal activities such as racketteering and money laundering.

At a recent press conference in Bulgaria Lord Goldsmith called for an upholding of the rule of law and presumed innocent principle, criticizing allegations by top Bulgarian government officials against Petrov which have been pronounced before the issuing of a verdict against the defendant.

The case of Petrov has come center-stage in Bulgarian public attention after PM Boyko Borisov and Minister of Interior Tsvetan Tsvetanov alleged Petrov is a central figure in the Bulgarian criminal underworld, and have branded him the head of a sprawling "Octopus" structure.

After Petrov's arrest in February however, the trial against him has not gone especially well, with Petrov being recently released on house arrest and the specific charges for heading an organized crime group dropped.

Since coming out of jail detention, Aleksei Petrov has made a number of public appearances, amply taking advantage of the public notoriety he unadvertently acquired in the process. He has not been shy to admit his political ambitions.

At the latest press conference held by Petrov at his home last Friday he presented high-profile legal counsels whom he had attracted to give advice to his lawyers. One of them was Yakov Israeli, a lawyer practising at the New York Bar and Israel.

Lord Goldsmith has a distinguished carreer as a British lawyer and after stepping down as Attorney General has joined US law company Debevoise & Plimpton.

At the press conference, he called for a halting of allegations against the defendant before a legitimate court sentence has been issued.

Lord Goldsmith was especially concerned that those allegations come from senior government officials, including the Bulgarian PM and Minister of Interior.

"Only the court can decide whether the defendant is guilty or not," said the leading UK jurist.

He also questioned the "sensational" way Petrov's arrest and trial is presented and pressed for a swift resolution of the case.