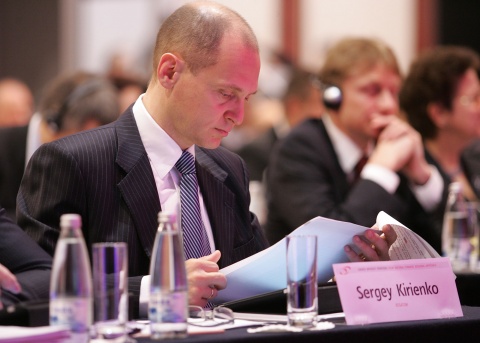 Rosatom's CEO, Sergey Kiriyenko, at the conference "Energy without frontiers" in Sofia. Photo by BGNES

Bulgaria and Russia have made a mistake by not specifying the exact raise of cost for the construction of the Belene nuclear power plant, the CEO of the Russian state nuclear energy company Rosatom has announced.

"When the contract was signed in 2006, it was defined how much would the plant cost then. This was the price for 2006. But everybody understood and signed the annex which stated that in 2015-2016, when the plant would be built, the price will change," the Rosatom CEO, Sergey Kiriyenko, said Tuesday at the conference "Energy without frontiers," organized in Sofia.

He added that no construction company would agree to work for a salary that was relevant in 2006.

"This is why our partners, Simens, do not want to work for a fixed price," Kiriyenko said, adding that the reasons of the construction companies are based on the fact that if there is an a inflation, the the cost of materials and equipment would change, which would affect the final cost of the whole project.

The Rosatom CEO also pointed out that at the time of signing the contract for Belene NPP, Bulgaria was supposed to finance 51% of the project.

"The situation has changed. Bulgaria does not want to invest money from its state budget in this project. I understand the position of the Bulgarian prime minister. It is pragmatic. We might not like it, but it is clear," Kiriyenko said, adding that this was a drastic change of conditions for the project.

He has explained that there were two options for the Belene plant. One option would be to stop the project, which would result in a waste of time and money that have already been spent.

This would also mean that Bulgaria will not be able to get back its investment in the project, which is about EUR 400 M, and would also have to pay compensations.

The other option, according to Kiriyenko, is the finding of solution for the problem. In his words, the only objective price for the Belene NPP could be given by the investor.

"Our position is responsible. We are ready to invest our money because we believe in the efficiency of the project. If the Bulgarian government wants us to finance 100% of the plant, we would agree. We believe that it would pay back," Kiriyenko said.

The Rosatom CEO and the Bulgarian PM Boyko Borisov are supposed to meet at 3 pm local time and continue the negotiations for the Belene plant project.

However, earlier on Tuesday, Borisov said he would agree to negotiate only if Rosatom admits it made a mistake and misled Bulgaria about the real price of the project.