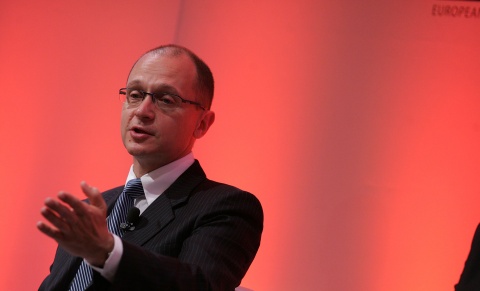 Sergey Kiriyenko, CEO of Russia's Rosatom, said in Sofia that the company was ready to provide fuel for Bulgaria's Belene NPP and to purchase it back for recycling. Photo by BGNES

Russian state nuclear energy company Rosatom has announced it was ready to provide nuclear fuel for Bulgaria's Belene nuclear power plant for the whole period of its exploitation, which is 60 years.

The Rosatom CEO, Sergey Kiriyenko, participated in the conference "Energy without frontiers," organized in Sofia on Tuesday.

He said that Russia could not only provide uranium to Bulgaria, but also purchase it again for recycling.

"I know that Bulgaria is a small country with limited territory. Since this is a very dangerous procedure, we are ready to process the fuel," Kiriyenko said.

He did not comment on the possibility for the EU to limit fuel exports to third parties, as the European Commission is planning at the moment as part of the EU energy strategy.

Kiriyenko presented the Belene NPP project as very safe, thanks to the latest model reactors. He said that the price for the project is EUR 6 B.

Prior to his statement, Bulgaria's PM Boyko Borisov urged him to admit that the EUR 4 B contract, signed by the previous Bulgarian Three-way Coalition cabinet, was misleading about the real price of the project.

The Rosatom CEO did not comment on Borisov's words. He pointed out that if Bulgaria wants to be an energy leader on the Balkans, it has to complete the Belene plant.

"No neighboring country could manage to finish its nuclear power plants before 2019. Bulgaria has the opportunity to do it by 2016-2017," Kiriyenko said.

He guaranteed that Bulgarian companies, mostly in the engineering industry, could receive orders for EUR 2,5 B and that 8000 job position could be open in the construction sphere.