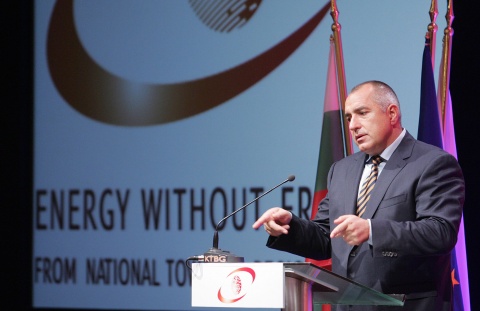 Bulgaria's PM Boyko Borisov at the opening of the conference "Energy without frontiers" in Sofia. Photo by BGNES

Bulgaria will not give any more money for the Belene nuclear power plant, Bulgaria's PM Boyko Borisov has announced.

On Tuesday, at the opening of the conference "Energy without frontiers" in Sofia, Borisov said that the project needs "a new philosophy." He has explained that if the project is good and safe enough, other ways for financing should be searched.

"Bulgaria will not give any more money. This is my firm opinion," the prime minister said.

His statement comes right before his meeting with Sergey Kiriyenko, CEO of the Russian state nuclear energy corporation Rosatom, which was supposed to focus on negotiations for the Belene NPP project.

Borisov said that he would negotiate with Kiriyenko only if he admits that Russia made a mistake and misled Bulgaria by announcing four years ago that the project would cost EUR 4 B.

"I told Kiriyenko very clearly that he should announce all that he has done with the Three-way Coalition cabinet on the Belene project and that they knew when signing the documents that the price would not be EUR 4 B because it is hidden in the inflation index," Borisov said.

Borisov accused the previous Three-way Coalition cabinet of aiming at achieving PR with the signing of the big energy projects with Russia. He said that they left the serious problems for him and "this is why we cannot agree on the price with the Russians."

The prime minister added that there are two investors who have announced their willingness to participate in the project and that the Bulgarian Economy Minister, Traicho Traikov, will talk to them on Tuesday.

"Many things will be established today," Borisov said.