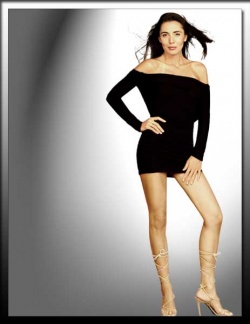 Bulgarian actress, Michelle Bonev, who has been living in Italy for years, stired a scandal with her movie “Farewell to Mom.” Photo by michellebonev.com

The scandal surrounding Bulgarian-born actress Michelle Bonev and her motion picture "Farewell to Mom" continues to flare, both in Italy and in Bulgaria.

Recently Italian media staged an attack on Bonev, claiming at the Venice Film Fest she received a "fabricated" award created just for her, and moreover that her participation was sponsored by the Italian government under the influence of Prime Minister, Silvio Berlusconi, who was Bonev's friend. The reports triggered demands for the resignation of Italian Minister of Culture Sandro Bondi.

Further, Italian media alleged the participation of a 40-strong Bulgarian delegation at Venice led by the Minister of Culture, Vezhdi Rashidov, has also been covered by the Italian government.

On Monday, in an interview for the Bulgarian largest private TV channel bTV, Bonev, the creator of the awarded movie, still unseen by the public at large, said she never thought such scandal would emerge from something "so nice."

The actress reiterated her Sunday statements that it was her company which paid for the trip of the Bulgarian delegation, added she delayed announcing the above information because she did not like to brag about herself.

"I invested EUR 3 M of my own money. My company paid for everything and I have documents to prove it. I learned the Bulgarian delegation might have to cancel the trip to the Venice Festival over budget concerns. It was so painful for me that I decided to pay all expenses by myself, but I failed to announce it, which I now realize was a mistake," Bonev said in a phone interview from Italy.

Despite the actress' revelation, the scandal remains the focus of attention of Italian media, citing Rashidov statements. The Italian Members of the Parliament are discussing Monday the accusations against Bondi.

The media are still trying to establish what kind of a business was Bonev's company Romantica Entertainment involved in, but there are allegations of scandals with young girls related to Berlusconi.

In addition, it was revealed the film "Farewell to Mom" was not initially listed in the Venice Fest contest program, and had been added later. The movie had been shown mostly for the Bulgarian delegation and not much of other audience had been present while the journalists, covering the event, had not known about it.

All of the above news came from Italy amidst local reports the Bulgarian National Film Center (NFC) has financed the movie with BGN 330 000.

Movie critic and member of the NFC Artistic Committee, Antoniya Kovacheva, also in an interview for bTV, said Monday she had no idea how the film ended with the subsidy since in never received the number of points required to even enter the list of movies that could obtain financing.

Kovacheva, however, explained that the code and the rules of the Center allow its Director, Alexander Donev, to make personal decisions on the distribution of the funds.

"He took on a personal responsibility that I am afraid can backfire. It is acceptable to invest a small amount of money in a similar project because it would give some work to Bulgarian actors. I can't say Donev's decision is entirely flawed," the movie critic pointed out, but stressed the whole story remains perplexing over the "movie enigma," which is still unknown to audiences.