Bulgaria's Alleged 'Octopus' Claims Witnesses against Him Were Bribed 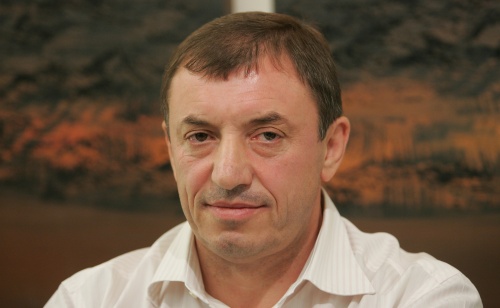 Alexey Petrov met with journalists in his house today to share his new claims. Photo by BGNES

The police operation against the alleged Bulgarian crime boss and ex-secret agent Aleksei Petrov has cost BGN 300 000, with an additional BGN 500 000 for bribing 10 witnesses against him, according to Petrov himself.

Petrov did not clarify who payed the money. He did, however, also state that prosecutors have offered him a deal in exchange of "certain engagements".

"They arrested me because they wanted me out of the political and social life. It was, indeed, an attempt on their side to eliminate the truth about Bulgaria's whole transitional period, " Petrov stated.

Alexei Petrov aka "The Tractor" was arrested in February during a special police operation entitled "Octopus" on charges that he has headed an organized crime group.

He spent nine months in the arrest pending a trial on charges of heading an underworld network implicated in prostitution, drugs, money laundering, extortion rackets and embezzlement. Last year, he was exposed as a secret agent of Bulgaria's main anti-mafia body, the State National Security Agency (DANS).

Petrov is in home arrest since October. Recently, he has been very active in the media and has emerged at the center of the Bulgarian political scene with various figures exchanging accusations that they are bound to him.

He is considered to be connected to the conservative "Law, Order and Justice" party.