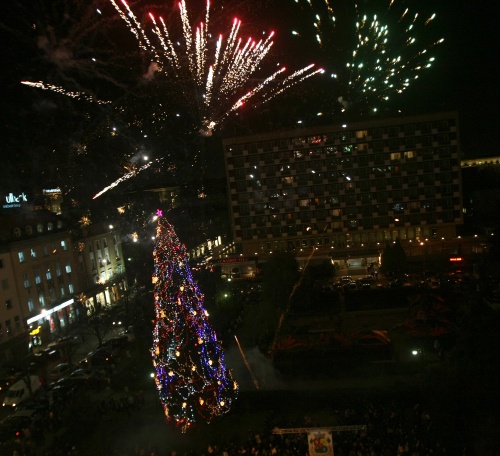 The Sofia Christmas Tree in 2009. Photo by BGNES

For the third consecutive year the Christmas lights of Bulgaria's capital Sofia will be lit on December 1.

The traditional Sofia Christmas tree, the 50-year-old pine near the Rila Hotel in the downtown, will be opened by Mayor Yordanka Fandakova, at 6:30 pm on December 1.

The Christmas Tree ceremony will be preceded by an open concert of dance and song groups, which will be brought from the National Palace of Culture to the tree with an antique tram car. The ceremony will feature fireworks.

For the first time in several years, there will be Christmas lights on the Brussels Blvd leading to the Sofia International Airport. The Russian Church, the Alexander Nevsky Cathedral and the National Theater will also feature special Christmas decorations, as will several other major boulevards and buildings.

The Sofia Municipality has set aside only BGN 30 000 for Christmas lights this year; this, however, is compensated by private companies whose combined contribution to making Sofia pretty for the winter holidays is over BGN 500 000.