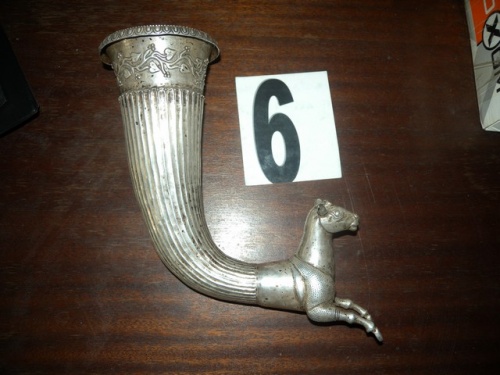 The unique ancient Thracian silver rhyton which was seized from treasure hunters in Kyustendil. Photo by Interior Ministry

Bulgaria's police cracked down on the traffic of archaeology items in a special operation codenamed "Treasure Hunters".

The operation was carried out in the Western town of Kyustendil and two nearby villages, with the police capturing 1 silver rhyton, a number of decorated ancient artifacts with images including statuettes, knives, bronze lamps, pottery vessels, rings, and 74 ancient coins from different time periods.

The police have nabbed five treasure hunters, two of whom are known to have a record.

The Bulgarian Interior Ministry announced that in 2010 so far the police in Kyustendil seized 43 ancient artifacts from treasure hunters.

Treasure hunting and preying upon Bulgaria's tremendous cultural and archaeological heritage is an enormous problem, with some estimates suggesting that up to 300 000 people might be involved in such activities, full-time or part-time, around the country.