At Least 345 Die in Stampede in Cambodia 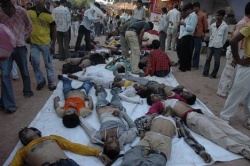 Victims of the stampede in Cambodia have been laid down on the ground. File photo

Cambodia has declared a national day of mourning on Tuesday after at least 345 people were killed in a stampede in the capital Phnom Penh, the BBC informed.

Most of the deaths were a result of suffocating and internal injuries, according to government officials. Hundreds more have been injured on the final day of the Water festival, which is on of the main events of the year.

The incident took place on a bridge, which had become overcrowded, according to witnesses.

A few people have fallen unconscious in the middle of the bridge, which caused a panic among people, who started stampeding, trying to get out of the narrow bridge.

“There were too many people on the bridge and then both ends were pushing. This caused a sudden panic. The pushing caused those in the middle to fall to the ground, then [get] crushed,” Sean Ngu, an Australian who was visiting family and friends in Cambrodia, told the BBC.

Cambodian Prime Minister, Hun Sen, has ordered an investigation of the case. He has also described the stampede as the “biggest tragedy” to hit Cambodia since the mass killings carried out in the 1970s.