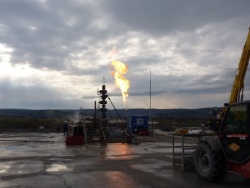 Photo of one of Direct Petroleum's facilities in Bulgaria.

The discovery was made in the fall by Direct Petroleum, a US company specializing in natural gas extraction with a Bulgarian branch.

The deposit is in the so-called Etropole argillite formation and is estimated based on previous data and new sample drillings. According to Tonev, those older results were neglected because no adequate technology was available to extract gas.

Shale gas is the same in composition to regular natural gas, but is found dissolved in clay-like rocks, instead of being trapped in underground cavities. As such, it requires a different and more intensive drilling technique only recently developed in the States.

Tonev, who spoke to Novinite.com on the matter, said that it is not yet clear how much of the 300 B cub.m. found will actually be accessible for commercial exploitation.

But he added that, given the great size of the discovery, "but no matter how small the percentage of extractability is, the quantities produced will be significant."

Exploitation will start within 4-5 years, after a number of regular preparatory procedures are finalized.

Direct Petroleum hopes to start the first ever shale gas extraction at another site - the 6 B cub.m. strong Deventsi source - by the end of 2011.