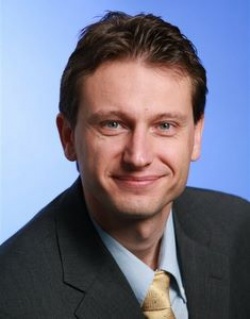 The company's primary objective is development and management of industrial terrains and innovation centers.

Prior to his current role, Mr. Nikolov has worked in KPMG and Deloitte in the area of management consulting in the USA, Romania and Bulgaria. He has managed projects at Fortune 100 companies in the banking, energy, pharmaceutical, and food and beverage industries.

What is the current phase of development of the project for an industrial zone in Bozhurishte near Sofia?

Currently, we are refining a Master Plan for the establishment of the industrial zone. It will be located on a terrain of 191.4 hectares.

Concurrently, we are investigating the options for connecting the internal infrastructures (electricity, water, gas, telecommunications, roads). We have a good idea how the project will be phased and we are fulfilling the important preliminary steps.

What exactly will be the structure of the management of the joint Bulgarian-Chinese venture for the Bozhurishte industrial zone, and what will be the participation of China's Zhejiang Province? How is the project expected to develop over time, i.e. when will the first industrial plants open doors?

We expect to partner with businesses from China in two major ways. Firstly, it is the creation and management of a joint venture with a leading Chinese province – Zhejiang Province.

This JV will operate a portion of the total plot in Bozhurishte and will offer industrial zone conditions to interested manufacturing firms from China and the world in general.

Secondly, apart from the joint Bulgarian-Chinese park, we will develop additional industrial, logistical and high-technology capabilities on the territory of the larger plot and Chinese businesses can directly talk with us about how to become residents in the park.

It is early to talk about plants for opening doors at this time. That being said, we are working very hard to move to the stage when the plants can start production. It is a complex process and we think we are managing it as efficiently as possible.

Do you have indications what kind of Chinese companies (state or private, in what sectors) are showing interest in investing in Bozhurishte?

Ownership structure is not a determining factor of the type of Chinese companies that will work in the park.

Why was the Bozhurishte Municipality near Sofia selected for this industrial zone? How was the connection with the Zhejiang Province established?

High officials from China and Zhejiang province came to Bulgaria on official visits several times so far. It became obvious that Sofia was preferred location for them.

Being the capital of the country, and an administrative, educational and business center, there are many skilled people that live in Sofia. Naturally, these are attractive points for any kind of investment that comes to Bulgaria. And Bozhurishte serves just that.

Do you think Chinese investors would become interested in similar industrial zone projects in Bulgaria? Do you think that if the Bozhurishte project is realized, it would be justified to say that it has not only economic but also geopolitical dimensions?

That is, the more Chinese businesses appreciate Bulgaria as a business destination, the more firms would be willing to come to Bulgaria. And this is all positive for the Bulgarian economy.

Many Chinese firms with international operations are looking for the most cost effective approaches to further expand their businesses. Bulgaria offers quite a few advantages – taxation benefits, educated labor force, a gateway to the EU, crossroads of several trans-European transportation corridors, etc. So, I hope will Bulgaria become a desirable investment destination for Chinese firms in that aspect.

Would it be safe to say that the realization of the Bozhurishte industrial zone could be seen as part of the start of the reversal of a global trend in which China was the ultimate destination for industrial outsourcing, and is now starting to outsource itself?

Outsourcing and reverse outsourcing are very complex business processes, and apart from the cost base that is aimed, quality of the final product has to be managed very well. These are just two elements. We can discuss, also, the multi-lingual and multi-cultural issues, the social aspects of outsourcing both in the home and the host country, and so on.

To talk that the zone in Bozhurishte is the beginning of a reversal of global outsourcing is not serious. Chinese businesses have investments all over the world, and they do invest because they see the value of the investments themselves and of the destinations in general.

I think Bulgaria offers a lot of positives, as I said earlier, and it is fair to look at the project as offering an opportunity to the Chinese businesses to take advantage of them.

I think you are getting to the gist of it. The future trend is to create innovative enterprises and high-technology enterprises. We would offer a combination of manufacturing space, logistical services, and opportunities for innovation transfer via the high-technology park that we are also working on.

According to your observations, how important are the low taxes that Bulgaria boasts for investors in industry and logistics? What other factors could be more important?

Taxation is very important. Bulgaria offers one of the lowest corporate taxes in Europe. Our Investment Encouragement Act, which was amended recently, further can provide tangible tax benefits to foreign firms willing to invest in the country.

The Act allows for R&D write-offs, exemptions on payment of corporate taxes, and other benefits, and it is a great mechanism to stimulate enterprises that enter Bulgaria.

Bulgaria's "National Company Industrial Zones" was set up in 2009 with respect to a rather ambitious plan of the former government for 100 industrial zones around the country that were supposed to turn Bulgaria into a strong export economy by 2018. Why did the government switch subsequently to a new plan for developing only several larger zones?

The company was established in the spring of 2009 with the goal of facilitating the inflow of FDI in the country by offering industrial terrains to the foreign firms.

I have been with the company since about one year ago, and we had to prioritize some of the terrains that we are currently developing.

Our priorities also include the creation of an innovation and a high-technology center, and this is a solid way to increase the competitiveness of the Bulgarian economy in general.

I personally think all industrial terrains are important – they can serve different manufacturing firm requirements in different times. In view of this, if a foreign firm contacts us, through our close work with the Ministry of the Economy, Energy and Tourism, and the Bulgarian Investment Agency, we can channel them to locations that are most attractive for them.

It is the Bulgarian economy that benefits after all and the more positive social effect that is being achieved that way.

How likely is it that Bulgaria's efforts to set up several "more tangible" industrial zones might be torpedoed by shortage of 1) labor in terms of the sheer quantity of workers; 2) shortage of qualified labor? Do you think that at some point Bulgaria might have to seek to import workers, whether skilled or unskilled?

As I mentioned the key is to go for innovative manufacturing processes and efficient operations. In this way there is pure learning for all workers involved, and the long term effect is a sustainable value that can be applied to other sectors of the Bulgarian economy. The focus should be on technology rather than on pure 'sheer quantity of workers'.

I don't think there will be a shortage of labor, maybe a steeper learning curve for some. After all, we live in a market economy where the labor mobility is determined by the requirements of the businesses, and the willingness and the capabilities of people to satisfy them.

Some people make the decision on whether to move from one location to another based on the wage that is being demanded and offered, making at the same time a compromise with their cultural, social, personal and other needs. So labor mobility is a natural thing in any market economy.

The National Company website says that it is working on the creation of a hi-tech park and incubator in large research and development and industrial centers in Bulgaria. Could you provide more details – where will this park be located, what is its present stage of development, what kinds of industries will it be tied to?

The park is meant to be developed on a portion of the terrain in Bozhurishte. It will consist of a high-technology park, a business incubator and the inherent technology transfer office. The park itself will serve as a base for R&D work coming from outside firms, from research teams, or from universities.

We would like this to be an in-sourced facility for pure R&D, containing labs, testing centers, and experimenting units.

The incubator will provide conditions to newly formed innovative firms by supporting them in various functional aspects of their business – marketing, finance, legal, business planning, etc., while leaving the pure R&D work to the firms themselves.

During the incubation period the resident firms will learn to be independent and thus become capable of managing themselves for the time after 'graduating' from the incubator.

This model works very successfully all over the developed world, and it is a base for making practical use of advanced science.

Currently, we are working with several potential partners what we would like to become part of the project. We are moving very seriously ahead with this initiative.