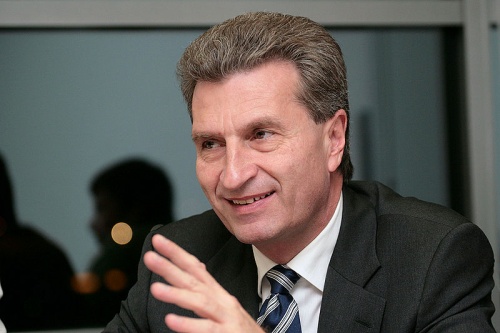 The competition between the South Stream and the Nabucco gas pipelines was admitted by EU Energy Commissioner Guenther Oettinger.

"South Stream can, in the long term, be considered a rival to the Nabucco project," Oettinger stated as an answer to a journalist's question during the 10th Anniversary of the EU-Russia Energy Dialogue High level conference in Brussels, 22 November 2010.

The EC used not to consider the two projects as competitors until recently.

Bulgaria, which already signed the South Stream deal with Russia November 13 2010, is eager to also participate in the Nabucco project, as it is seen as an opportunity for the Balkan country to eliminate its complete energy dependence from Russia.

The other major gas project, the EU-backed Nabucco will directly connect the world's richest gas regions - the Caspian region and the Middle East - to the European consumer markets. It is also planned to pass through Bulgaria.

The pipeline will link the Eastern and Southern border of Turkey to Baumgarten in Austria - one of the most important gas turntables in Central Europe - via Bulgaria, Romania and Hungary. It will be 3 300 km (1,800-mile) and aims to diversify gas supplies in Europe.

The Nabucco project is estimated to cost EUR 7.9 B.

According to Turkmenistan's First Deputy Prime Minister Baymurad Khojamukhamedov, his country is ready to provide 40 billion cubic meters of gas annually for the Nabucco gas pipeline.