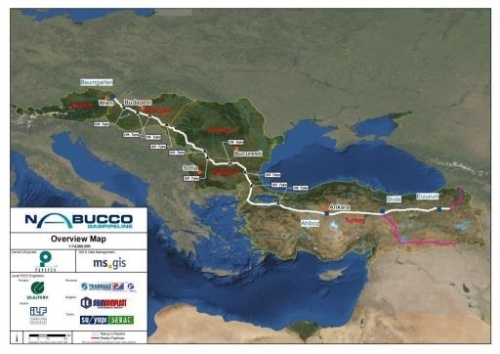 Bulgaria's Foreign Ministry insists on fast progress on the construction of the Nabucco gas transit pipeline after at the end of last week Turkmenistan announced it was ready to provide the project with more natural gas that it can handle.

Bulgaria's Foreign Minister Nikolay Mladenov will meet on November 23, Tuesday, in Vienna, with the management of the Nabucco Gas Pipeline International, the consortium formed by Turkey, Bulgaria, Romania, Hungary, Austria, and Germany for the construction and operation of the pipeline.

"I asked for this meeting because the realization of Nabucco is a priority for Bulgaria and for Europe. It is our country that made everything necessary to facilitate the start of the project. That is why we must be active in mobilizing the support for it. Especially now because of the opportunities that emerged before Nabucco after the announcement of Turkmenistan's First Deputy Prime Minister Baymurad Khojamukhamedov that his country is ready to provide 40 billion cubic meters of gas annually for Nabucco," explained Mladenov.

At an energy forum last Friday, Khojamukhamedov pledged there would be an agreement on constructing a trans-Caspian pipeline along the bottom of the sea to transport Turkmen gas across the Caspian to Azerbaijan where it would be fed into pipelines linking up with the Nabucco pipeline.

In his words, a pipeline from gas fields in Eastern Turkmenistan to the Caspian Sea was already under construction.

Turkmenistan's Deputy PM made it clear that it had 40 billion cubic meters of spare natural gas annually to offer the EU.

"Taking into account domestic demand in the west of the country and supplies from there to Iran, we will have 40 billion cubic meters of gas free every year, so European countries need not worry," he said.

This amount is larger than the projected capacity of 31 billion cubic meters of gas annually which Nabucco is supposed to transfer from the Middle East, the Caucasus, and the Caspian Region through Turkey into Bulgaria and the rest of the EU.

Turkmenistan has not formally committed yet to any supplies for Nabucco even though its officials have mentioned the 3300-km long EU pipe as part of the country's scheme to diversify its markets.

Turkmenistan's support as a gas supplier could prove to be key for Nabucco because the project has been seriously questioned over the lack of potential sources. As of now, after its expected completion in 2014, it is expected to draw gas from Iraqi Kurdistan and Azerbaijan.

The race between Nabucco and its rival Russian sponsored project South Stream appears to be tightening after last week Bulgaria and Russia signed a key deal for the construction of the South Stream section on Bulgarian soil.

Bulgaria, which is a crucial participant in both projects, has granted support for both Nabucco and South Stream.