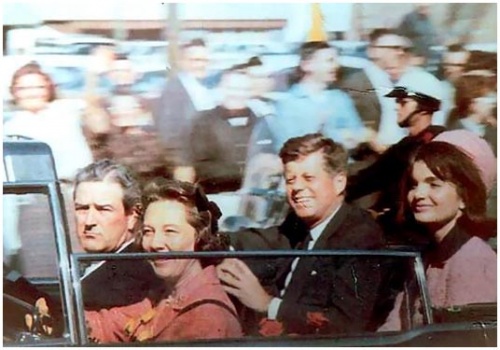 President Kennedy and First lady in the back seat of the car, moments before he was shot and killed in Dallas, TX, on November 22, 1963. Photo by www.spartacus.schoolnet.co.uk

The US and the world mark Monday, November 22, the 47th anniversary of the assassination of US President, John F. Kennedy, deemed one of the defining moments in history.

The assassination of John F. Kennedy, the thirty-fifth President of the United States, took place on Friday, November 22, 1963, in Dallas, Texas, at 12:30 p.m. Central Standard Time in Dealey Plaza. Kennedy was fatally shot while riding with his wife Jacqueline in a Presidential motorcade.

The ten-month investigation of the Warren Commission of 1963–1964, the United States House Select Committee on Assassinations (HSCA) of 1976–1979, and other government investigations concluded that the President was assassinated by Lee Harvey Oswald, who was subsequently murdered by Jack Ruby, before he could stand trial.

In 1979, the House Select Committee on Assassinations found both the original FBI investigation and the Warren Commission Report to be seriously flawed. The HSCA also concluded that there were at least four shots fired, that there was a "high probability" that two gunmen fired at the President, and that it was probable that a conspiracy existed.

Later studies, including one by the National Academy of Sciences, have called into question the accuracy of the evidence used by the HSCA to support its finding of four shots.

The assassination is still the subject of widespread debate and has spawned numerous conspiracy theories and alternative scenarios.

Meanwhile a CNN Monday report informs that after mostly avoiding the spotlight for decades, many of the former US Secret Service agents who were assigned to protect President Kennedy are now offering their accounts of the day he was assassinated, 47 years ago.

After the first shot hit the president, former agent Clint Hill is quoted saying, "I saw him grab at his throat and lean to his left. So I jumped and ran.Just before I got to the car, the third shot hit him in the head. It was too late.""

Hill is the man seen running toward the limousine in the famous film of the shooting, captured by a bystander named Abraham Zapruder. Hill jumped onto the back of the presidential car, in a desperate attempt to protect the president.

First lady Jackie Kennedy had climbed onto the back hood of the car, but Hill moved her back into her seat, and attempted to shield the two of them from any further bullets, as the car sped to the hospital.

As the president's head lay in her lap, Hill heard the First Lady say, "Oh, Jack, what have they done to you?"

A newly detailed account of the assassination is also laid out in the recent book "The Kennedy Detail," by former agent Jerry Blaine, written with journalist Lisa McCubbin, based on interviews with many of the agents who covered Kennedy. Former agent Hill, who has rarely granted interviews about the shooting, wrote a foreword.