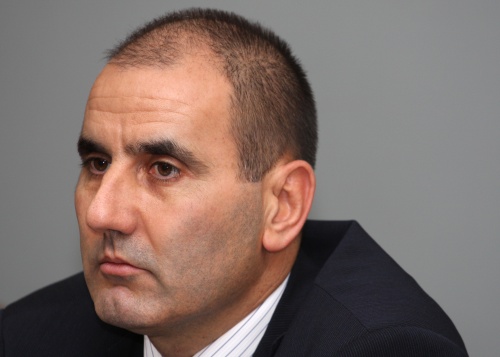 According to Bulgaria's Interior Minister, Tsvetan Tsvetanov, the former Chief Prosecutor, Nikola Filchev, could escape from the country. Photo by BGNES

In an interview Saturday for the Bulgarian private Nova TV, Tsvetanov said that Filchev "could" escape from the country.

The minister also added that the ex chief prosecutor and the former secret agent Alexei Petrov "know each other very well."

At the beginning of the week, Tsvetanov said there was a new theory for the murder of lawyer Nadezhda Georgieva and prosecutor Nikolay Kolev back in 2000 and 2003, and accused Filchev for being the mastermind behind the murders.

The minister reiterated that Alexei Petrov was involved in racketeering, extortion and money laundering.

The family of the lawyer, who was blown up in her car, have accused Tsvetanov of hindering the investigation of the case by linking it to the murder of prosecutor Nikolay Kolev and claiming that Filchev or Petrov are behind the two murders.

Margarita Georgieva, the lawyer's sister has stated that she believes the assassinated prosecutor is actually the reason the investigation of the murder of the lawyer was obstructed.

Even though he defended Tsvetanov, Bulgaria's PM Boyko Borisov, who was Secretary General of the Interior Ministry at the time, has stated that at the night of the murder, Filchev called him and requested that all efforts were made for the investigation of the case.