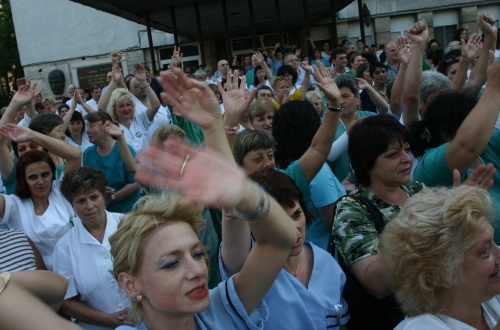 Bulgarian doctors have called a nationwide protest to be held Friday in Sofia in front of the Parliament building.

Gathered under the slogan "Stop Experimenting with Bulgaria's Healthcare!", medics are requesting a more consistent government policy in the sector.

In particular they have been frustrated over the fall with the chronic problems in state funding for healthcare and the unwillingness of the government to pay due arrears.

But doctors are also objecting towards what they see as an erratic behavior in which ministers as well as PM Boyko Borisov do not give a clear signals about the direction they intend to take, thus seeming to betray lack of vision and competence.

In the light of the recent developments, the Bulgarian Medical Association has requested the dissolution of the National Healthcare Fund (NZOK) in light of cabinet proposals that funding for healtcare be decided upon directly from the central government.

President of BMA Tsvetan Raychinov had stated that a lot of fund might be "leaking" via NZOK, but determining prices and funding for health directly at the Ministry of Finance is will not be a good practice either.