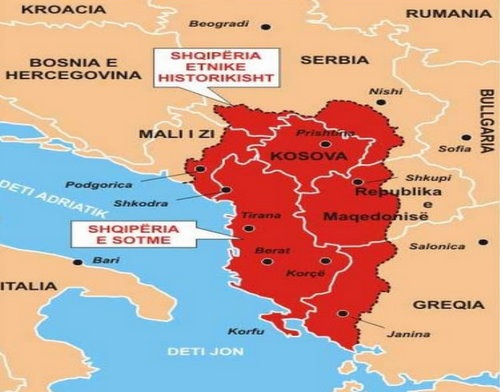 Map of Greater Albania as claimed by Albanian nationalists. Map by WIkipedia

The majorities of the ethnic Albanians living in Kosovo, Albania, and Macedonia in favor of forming a "Greater Albania," a poll shows.

80% of the Albanians in Kosovo, 62% of those in Albania, and 51% of the Albanian minority in Macedonia back the idea for forming a Greater Albania, according to a poll of Gallup carried out in cooperation with the European Fund for the Balkans, cited by Macedonian TV Kanal 5.

An alliance between Albania and Kosovo has smaller support – 33.7% in Albania and 29.2% in Kosovo, according to the report of the Serbian media B92.

According to Albanian nationalists, a hypothetical "Greater Albania" would feature the entire territories of Albania and Kosovo, about half of Macedonia, and parts of Southern Serbia, Montenegro and Greece.

Fears that a scenario for creating a Greater Albania were on the way emerged after the Kosovo War in 1999 and the subsequent insurgency in Macedonia, which was settled through a constitutional compromise, the Ohrid Accord, in 2001.