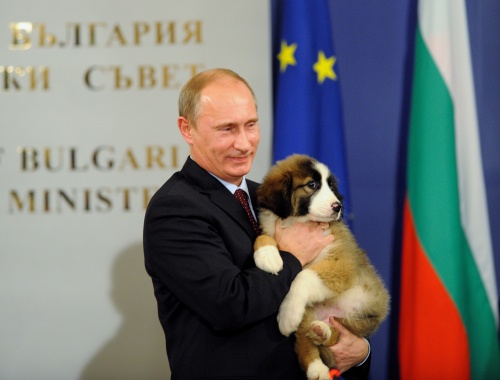 Putin has been said to be making much good PR out of his Bulgarian present - the Bulgarian Shepherd puppy Yorgo. Photo by BGNES

Russian Internet users have inundated the web with ideas on how to re-name Yorgo, the Bulgarian Shepherd puppy recently presented to Prime Minister Putin by his Bulgarian counterpart Borisov.

Putin's press service announced the PM asked the Russians to help him pick a name for the furry creature, whose photos with Putin and Borisov in Sofia made headlines around the world.

Most of the Russians who have taken part in the naming campaign go about it with a sense of humor but many are critical saying Putin should have more important things to deal with.

A forum user has suggested that Putin's protege, President Dmitry Medvedev, should punish him for using the government website to resolve his personal problems, i.e. finding a name for his new dog.

Western European media have been quick to suggest that Putin is using the entire hype around his Bulgarian Shepherd puppy to reap good PR benefits ahead of the Russian Presidential elections in 2012 when he is believed he might run again.