Ally Threatens to Abandon Borisov over Praise of Zhivkov 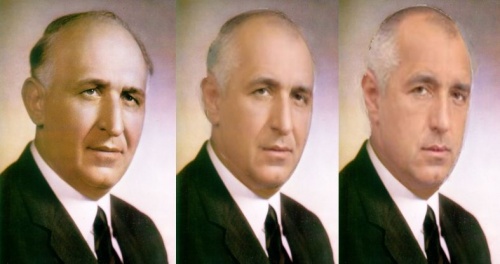 Bulgarian bloggers recently pointed to an amazing resemblance between dictator Todor Zhivkov and current Prime Minister Boyko Borisov, presenting in a collage the latter as originating from the communist leader. File photo

"We are one step away from turning into adversaries of the government," said former prime minister Ivan Kostov, who now leads Democrats for a Strong Bulgaria. The small centre-right party has no ministers in Mr Borisov's government but has supported the prime minister since he took office in July 2009.

Mr Kostov has, however, grown increasingly critical of Mr Borisov's economic performance and of what he sees as the latter's fear to implement reforms in health care, pensions and state administration.

Mr Borisov recently said in public: "It would be a tremendous success for any government to build one percent of what [Todor Zhivkov] has built for Bulgaria ... and achieve the economic growth of the state at that time."

Mr Borisov, a former policeman and bodyguard, owned the firm that provided security for Mr Zhivkov from the year he was forced to step down in 1989 till his death in 1998. Many Bulgarians have drawn parallels between the two men's coarse manners, folksy style and colloquial language.

"The fact that 20 years after Zhivkov's fall from power nobody has forgotten him shows that many things have been accomplished," said Mr Borisov. "It is also a fact that for 20 years now we have been just privatising what had been built during his time."

"This rehabilitation of Zhivkov – personally by the Bulgarian prime minister – is the only one in the history of our painful transition from communism to democracy," Mr Kostov told a meeting of his party. "It is an outrage for all Bulgarian democrats."

He urged the European People's Party (EPP), of which Mr Borisov's party GERB is a member, to look into his statement. There was no immediate reaction from the EPP.

GERB has 117 seats in the 240-member unicameral parliament, Ataka has 21 and Kostov's party has 14. A possible defection by Mr Kostov would not immediately deprive Mr Borisov of majority support in parliament, but would leave him dependent solely on the fervently nationalist and xenophobic Ataka party.

Ataka recently threatened to ditch the government after GERB refused to back its proposal to hold a referendum on Turkey's EU candidacy in parliament.

Mr Zhivkov turned Bulgaria into the most loyal Soviet ally during the Cold War. He ruled with an iron fist for 35 years until he was deposed in an internal party coup on 10 November 10 1989.

He left the state with a crumbling Soviet-style economy and a US billion foreign debt on which Bulgaria defaulted shortly after he was ousted. It took more than ten years for his people to reschedule, restructure and repay the bulk of those obligations.