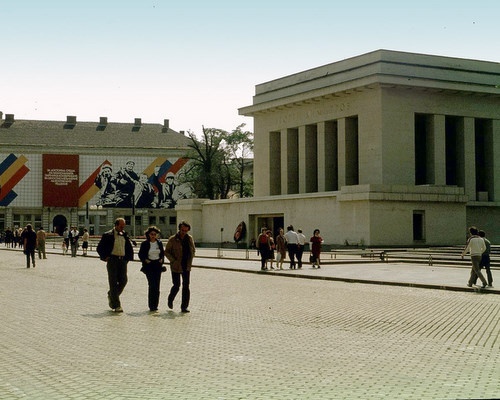 The Georgi Dimitrov Mausoleum in Sofia was torn down in 1999. Photo by lostbulgaria.com

Bulgaria's Culture Minister, Vezhdi Rashidov, is planning on bringing back the atmosphere of the demolished Sofia mausoleum of Communist leader, Georgi Dimitrov.

The future Museum of Totalitarian Art will be located the building of the Culture Ministry in the Sofia "Darvenitsa" district.

The building was given to the TV channel Seven Days, but the Ministry recently reacquired it back and now Rashidov wants to turn one of its floors into a museum, according to the Bulgarian news agency BGNES.

The mausoleum will be in a bunker in the yard, which is currently being cleaned. Years ago, the now Minister collected parts of the door of the demolished mausoleum and wants to display them there. Inside the bunker, there will be a wax figure of Georgi Dimitrov, the Minister says, adding totalitarian art had produced some great masterpieces.

Georgi Dimitrov, leader of the Bulgarian Communist Party, best known about the Leipzig Case, where he was tried for being part of an alleged plot to set the Reichstag on fire, died on July 2, 1949, in the Barvikha sanatorium near Moscow. The decision to embalm his body body and place it on display in the Sofia Georgi Dimitrov Mausoleum was made the next day. The deadline for the design was 24 hours, and architects Ovcharov and Ribarov, amazingly, were able to adhere to it, while the deadline for the construction was 138 hours. On July 10, Dimitrov's body was placed in the mausoleum on "Knyaz Alexander I" square.

After the fall of the Communism, in July 1990, the new cabinet decided to take out the remains and bury them. The decision was carried out the very same night.

The mausoleum was torn down in August, 1999.