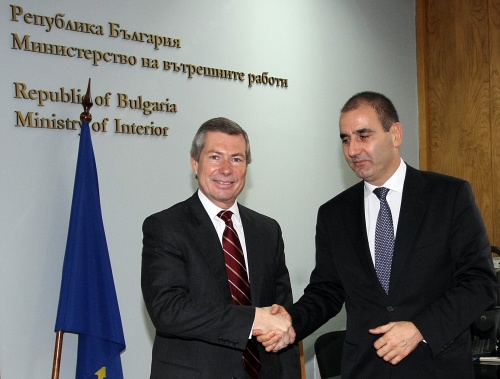 Yet another ordered assassination from the past is about to be discovered, Bulgaria's Interior Minister, Tsvetan Tsvetanov has announced.

"Now we have all the political will and the operational freedom for the employees of the Interior Ministry to prove their professionalism. We could not have done it without the support of the parliamentary group, the Council of Ministers and the Prime Minister," Tsvetanov said Wednesday after his meeting with the US Ambassador to Bulgaria, James Warlick.

There has not been a specific occasion for the meeting. In Warlick's words, his meetings with Tsvetanov happen on a regular basis and Wednesday's meeting aimed at highlighting the good cooperation between the Interior Ministry and the United States.

The other goal of the meeting was to announce that Tsvetanov will visit Washington in early December.

"I think what we do today should be respected and I thank all the employees who took the burden of fighting crime," the interior minister said.

The US Ambassador has agreed with him.

"Today, Sofia streets are safer than ever. Minister Tsvetanov is taking measures, which have not been seen in 20 years," he said.

He has also given examples of the good cooperation between the two countries. In his words, a female US citizen has been arrested for child kidnapping and will be extradited soon.

Warlick also noted that a FBI agent, who is a leading expert on cyber security, has chosen to come work in Bulgaria and cooperate with Bulgarian authorities in their fight against intellectual property crimes.

The interior minister has also discussed the case of Bulgaria's ex Chief Prosecutor Nikola Filchev, whom Tsvetanov accused of being the mastermind behind the mysterious murders of the lawyer Nadezhda Georgieva and the prosecutor Nikolay Kolev back in 2000 and 2003.

"There are circumstances and statements of relatives that we are obliged to check and this is what we are doing at the moment. What I said was one of the hypotheses for the possible murder of Kolev. It could have been connected to the former chief prosecutor from what was said by Kolev's wife," Tsvetanov said.

He has pointed out that there was "no charge towards anyone" and that the police were only checking all versions, connected to possible hypotheses for the execution or concealment of one of the unsolved crimes that occurred in the last 20 years.

"It is normal for us to see what is this report that Filchev is talking about for the involvement of prosecutor Kolev to drug trafficking. We will see why this has not been checked so far," Tsvetanov said.

Filchev has answered the minister's statements, accusing in turn Tsvetanov of acting illegitimately.

"Such unsubstantiated allegations are actually breaking the law. Tsvetanov acts as a prosecutor and instead of collecting evidence, he goes around TV stations and throws accusations and sometimes sentences," Filchev said.