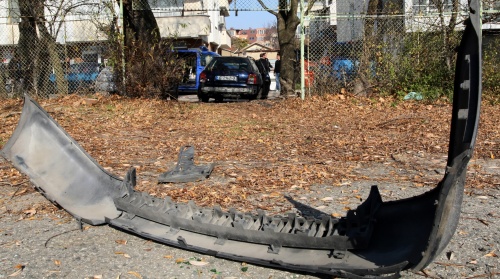 A part of Pavel Manchenko's blown vehicle. Photo by BGNES

The accident with Manchenko's Audi A4 has occurred early in Tuesday morning on Kalimantsi str in Sofia, where he lives.

No people have been hurt, according to the Ministry of Internal Affairs. The police is still investigating the case.

"Intimidation has probably been the purpose in this case, " Interior Minister Tsvetan Tsvetanov commented.

Recently, a total of 320 kg of gold, 20 kg of silver, and 1 kg of platinum were stolen from a storage facility of the Bulgarian Customs Agency located at Terminal 1 of the Sofia International Airport. Subsequently, the Bulgarian police busted six men, including a former senior customs officer, who were believed to be the perpetrators.