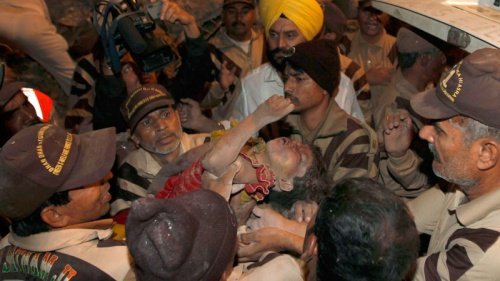 At least 64 people died and another 70 were injured after a five-story residential building in the India capital, New Delhi, collapsed on Tuesday, fire officials said.

The building apparently collapsed because its foundations had weakened after exposure to water from this year's heavy monsoons, said City Municipal Spokesman Deep Mathur and Chief Minister of New Delhi Sheila Dikshit. The structure was situated closely to the Yamuna River that flows through New Delhi.

"I believe it's an unauthorized building," Dikshit said. "I believe there was water in the bottom of the basement for many days."

She expressed sympathy for the families of the dead and promised to "inquire into the causes of the tragedy."

Encroachments on public land, illegally built structures and the use of residential buildings for commercial activities are common in New Delhi, which is home to about 17 million people. The weak enforcement of laws and corruption are generally blamed for unauthorized building.