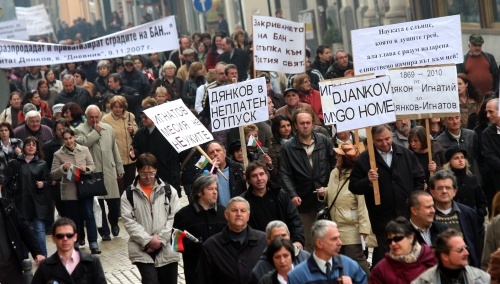 "BAS Closure - A Step Towards the Third World", reads one of the banners of the protesting scientists. Photo by BGNES

PM Boyko Borisov and speaker of Parliament Tsetska Tsacheva unanimously announced Monday intentions to demolish the Bulgarian Academy of Sciences, the oldest and most prestigious research institution in the country.

Speaking in an interview for nationally-aired bTV channel, PM Borisov stated that the institutes of the Academy will be transfered under the control of the state or universities, depending on their nature.

Parliament chair Tsacheva made precisely the same announcement just minutes later, speaking at Sofia University at a round table on the problems with financing state education in Bulgaria amidst drastic cuts and a stated unwillingness on the part of the state to commit.

According to Borisov's and Tsacheva's words, the "institutes with national significance" and those "working for the state" will move under the authority of the central government, while the rest will be incorporated in universities.

This in effect means the liquidation of BAS as an entity.

It is also the revival of a project announced this spring by Minister of Education Sergei Ignatov, which would see the central BAS administration abolished and institutes transfered under the authority of the Ministry of Education.

Any such changes will require the amendment of the acting Law on the Bulgarian Academy of Sciences. The intention voiced last spring was scrapped after massive protests on the part of BAS late May.

Over the past weeks, BAS researchers, as well as university students and professors, have come out on fresh rallies to protest the underfunding of education and research in Bulgaria.

On November 3, BAS threatened to dissolve itself should it not receive adequate funds for its activities, as well as to inform relevant international institutions of the state it has been reduced to by the Bulgarian government.

Asked about that matter Monday, Bulgarian PM Boyko Borisov said: "Well, let them dissolve themselves! I'm sick of listening to threats coming from all quarters!"

He has now, at least in words, relinquished his May vow not to dismantle the Academy, and pressed on to a reciprocating blackmailing campaign coordinated with Parliamentary speaker Tsacheva.

On his part, Minister of Education Sergei Ignatov, with the firm backing of Minister of Finance Simeon Djankov - a self-professed loather of BAS - have launched a peculiar campaign of refashioning Bulgarian research and education and introducing into it a "market principle."

Over this year, the Bulgarian Academy of Sciences has staged a massive internal reform aimed at optimizing its structures and self-limiting already scarce spending. A number of institutes were merged and administration was drastically cut.

Still, funds allotted by the state have been insufficient, with researchers even regularly forced to take unpaid leaves.