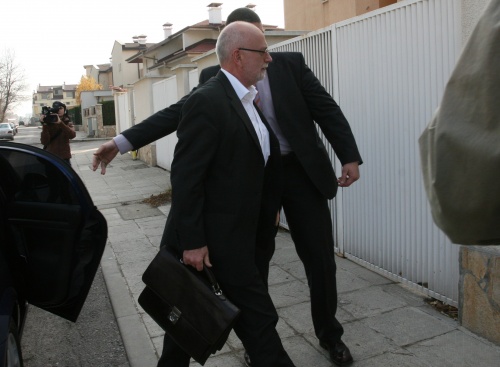 German top investigative journalist Jurgen Roth, who paid a visit Friday to the home of controversial businessman, ex agent and alleged crime boss Aleksei Petrov, has given an account of the meeting to Deutsche Welle.

Immediately after the talks with Petrov, whom Roth called earlier one of "Bulgaria's new demons," the journalist refused to make any comments for Bulgarian reporters with the words: "I need to check my documents."

On Monday, Roth told Deutsche Welle his conversation with Petrov had not included anything really important, saying the former agent of the Bulgarian State Agency for National Security (DANS) talked to him for 15 minutes about his past and how he had been in a competition, for the last 25 years, with now Prime Minister, Boyko Borisov.

The German journalist explained Petrov sees himself as the victim of a plot, starting at DANS and reaching the Prosecutor's Office, foreign embassies and the media.

"This is the non-sense and the absurdities Petrov kept talking to me about, but it shows how some people can only think within the frames of the secret services and use misinformation to gain political influence," Roth said, adding speculations Petrov, aka The Tractor or The Octopus, might run for President are groundless.

"He did not strike me as being very bright. The Presidential post is way above his capabilities. I cannot imagine Bulgarian voters would behave in such stupid manner, but with media support anything can happen," the journalist pointed out.

Roth also informed he met with Interior Minister, Tsvetan Tsvetanov, and learned the murder of Prosecutor Nikolay Kolev had been personally ordered by former Chief Prosecutor, Nikola Filchev, while the actual assassination had been done by Petrov's employees.

Filchev had also ordered the murder of attorney Nadezhda Georgieva in February 2000. It had been carried out by people working for The Tractor as well. The journalist informed Petrov had avoided talking about these murders during their meeting.