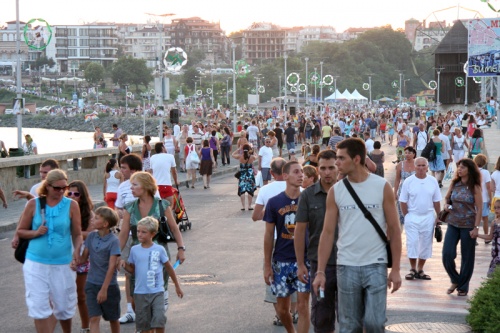 Vacationers walk on the bridge connecting the old part of the historical coastal town of Nessebar with the new one. Photo by BGNES

Residents of Bulgaria's coastal "Old Town Nessebar," a UNESCO world cultural heritage site, are rallying against the demolition of their houses by the State.

The action of the State National Construction Control (DNSK) agency is scheduled for Monday and involves the destruction of six illegally-built houses and two stores, but the hotels would not be touched, according to DNSK.

Gathered under the motto "Old Nessebar – Eternal but Alive," about 100 people and 50 vehicles have been blocking the bridge over the isthmus connecting the old part of the town with the new one since Sunday evening.

Clashes between the police and the demonstrators, waiving black flags and posters, have been reported over the authorities attempt to break the human fence.

The participants in the rally are further requesting a referendum on Nessebar's UNESCO status.

Mayor, Nikolay Dimitrov, is also in attendance, showing support for the demonstrators, who say due to unclear construction rules and unfulfilled promises of institutions to issue building permits, lasting 20 years now, about 100 families face the huge problem of being left in the cold without any other alternative than demolition.

The Town Hall is saying the State's burdensome and slow procedures are to blame from stopping people to act according to the law.