Bulgarian PM: Russian Gas for Bulgaria Will Be Cheaper 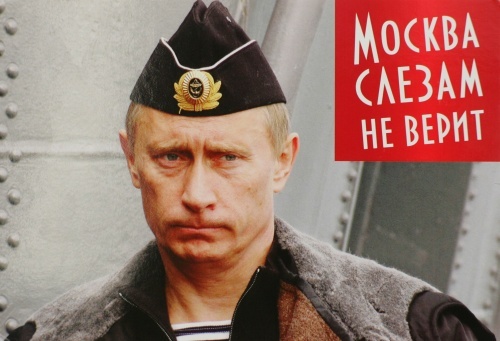 A humorous card produced on occasion of Russian PM Vladimir Putin's Saturday visit to Sofia, showing him dressed in military garb, with the title of popular Russian movie "Moscow Does Not Believe in Tears".

Bulgarian PM Boyko Borisov has stated that his country will be buying Russian gas at lower prices, just a day after talks with Russian PM Vladimir Putin appeared to end at stalemate on that matter.

PM Borisov spoke to the Bulgarian National Radio from the western village of Gigintsi, where he is present at the first service at the new church of the St. Anargyroi and Miracle-Workers Cosmas and Damian monastery.

"The price of Russian natural gas is falling and will continue to fall," said the Bulgarian PM.

Although at the time of the Saturday visit in Sofia ITAR-TASS had published information that Gazprom is ready to offer lower prices to Bulgaria, statements by Putin after the meeting suggested that not much has been achieved in that area.

It was hoped that Bulgaria might request lower gas prices in return for contributing for the swifter development of Russian-sponsored South Stream natural gas pipeline project.

Saturday Vladimir Putin had deflected the question of lower gas prices by saying that the two matters are not related and that Gazprom receives only a fraction of the price paid by Bulgaria.

Sunday when asked on that topic Bulgarian PM Borisov confirmed that prices are indeed going to fall, but somewhat contradictorily stated that he must not discuss the matter, for that was the wish of companies involved lest the market should be affected.

This explains why no further details to PM Borisov's statement were given.