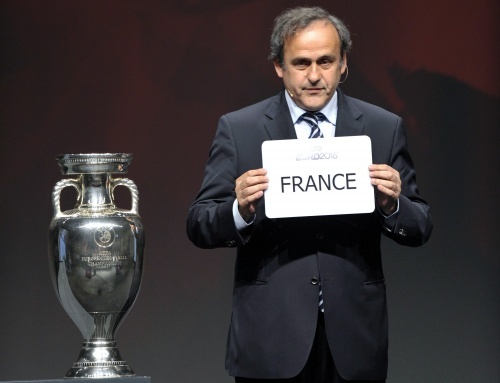 UEFA President Michel Platini announcing that France will stage Euro 2016, in May 2010. Photo by EPA/BGNES

Bulgaria is all set for hosting the youth Euro 2013, said UEFA president Michel Platini, who is on an official visit to the country Sunday.

Bulgaria currently is being considered together with four more potential hosts to the 2013 event - the Czech Republic, England, Israel and Wales.

Platini said he and Bulgarian Football Union President Borislav Mihailov had complete unanimity in matters they discussed. "The only thing we disaggreed on is whether he'd be able to save a penalty kick by me," joked the former French midfielder in regards to his talks with the former Bulgarian goalie.

The UEFA president did not express a great familiarity with Bulgarian club football, but said that the UEFA central has sent letters to the Bulgarian Football Union requesting information about official games of the national championship that are suspected to have been settled outside of the field.

"It is not up to the Bulgarian Football Union and Mihailov to review the signals and to decide whether to refer matters to the prosecutor," stated Platini, demanding fair play and transparency in the Bulgarian National Championship.

During his visit to Sofia, Michel Platini also met Bulgarian PM Boyko Borisov. Among other things, the two discussed opportunities for financing projects relating to football.