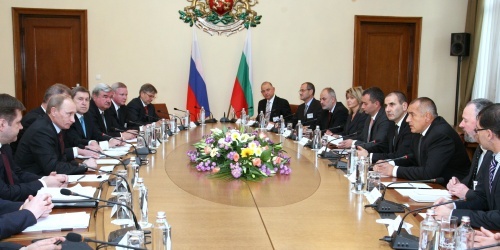 The government delegations of Bulgaria and Russia pictured during their talks in Sofia on Nov 13, 2010. Photo by BGNES

The proposals for an intensification of cultural cooperation that the Russian delegation to Sofia advanced Saturday were met somewhat lukewarmly by the Bulgarian party.

This appears from the official transcript of the meeting Saturday headed by Bulgarian and Russian PMs Boyko Borisov and Vladimir Putin.

Near the end of the talks, Russian Minister of Energy and co-president of the bilateral intergovernmental commission Sergei Shmatko drew attention to a number of cultural initatives between the two countries, such as joint educational and research programs, as well as the celebration of the 65th anniversary of the May 9, 1945 victory over Nazism.

Those remarks were not taken up and elaborated by the Bulgarian party. PM Borisov commended them, but in the next sentence chose to stress that the relations between Russia and Bulgaria are "pragmatic." Bulgarian Minister of Economy and Energy Traicho Traikov followed up by leading the conversation to purely economic topics.

Bulgaria and Russia have had a lasting cultural and emotional relationship since at least the late Middle Ages. In more recent history, the Russo-Turkish War of 1877-78 resulted in the liberation of Bulgaria from the Ottoman Empire.

Ever since then, Bulgarian upper-level society and politics have been polarized by a pro- and anti-Russian camp, a predicament intensified since 1944, when Bulgaria fell within the Soviet "sphere of influence."

All this has not obliterated a deep-seated popular love for Russia among ordinary Bulgarians, who regard the Russian people with a peculiar kind of fondness reserved for someone you both feel close to and admire.

On the other hand, this has not prevented official Russian and Bulgarian foreign policy towards each other to take some not-so-pleasant turns over the years.