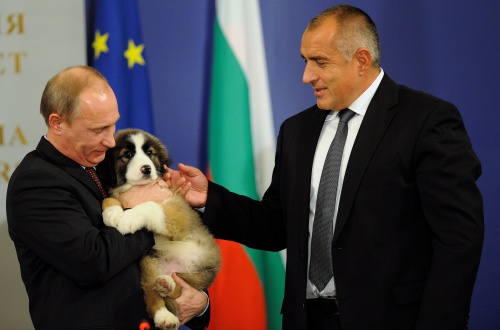 The Russian Prime Minister Vladimir Putin has been captivated by his Bulgarian counterpart Boyko Borisov's gift for him Saturday - a Bulgarian Shepherd puppy.

Putin held in his arms and kissed his sweet new friend after a press conference in the Bulgarian capital Sofia, where the Russian Prime Minister is on a high-profile visit heading a delegation for key energy talks with Borisov.

"I gave the puppy to Putin as a present, I hope this typically Bulgarian breed will bring him joy," Borisov said.

Another male puppy of Borisov's is reportedly being secretly trained as a gift for present US President Barack Obama.

The Bulgarian shepherd dog is a breed which originated in Bulgaria as a mountain livestock guardian dog. Karakachan dogs are large, long-haired, massive dogs with a well-developed musculature.

The Bulgarian Shepherd was recognized as a separate breed only a few months ago as a result of the Borisov-inspired efforts of the Bulgarian government.

A Photo Story of Putin with his new pet, the Bulgarian Shepherd puppy presented to him by Borisov, VIEW HERE