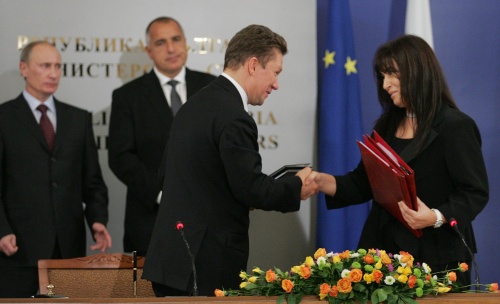 Bulgaria and Russia have signed an intergovernmental agreement for the construction of the Bulgarian section of the South Stream gas transit pipeline in the presence of their Prime Ministers, Boyko Borisov and Vladimir Putin, in Sofia.

The two state delegations of Bulgaria and Russia formally signed the South Stream agreement, consisting of two documents, which had been prepared in advance in the past few weeks.

The deal stipulates the establishment of a joint venture, South Stream AD, which will manage the construction and the operation of the South Stream gas transit pipeline on Bulgarian territory – which will be the most crucial land section of the pipe. BEH and Gazprom will each have a 50% share.

"I would like to thank Prime Minister Borisov for the invitation, our dialogue is a friendly one," Russian Prime Minister Vladimir Putin stated at the joint news conference of the two state leaders after the signing of the South Stream deal and two other intergovernmental agreements.

"The Russian-Bulgaria commercial and economic cooperation is doing well, we have already surpassed the volume from the crisis year 2009. Our relations are in various spheres but our most important ties are in the energy sector, and in this sense one of the most important projects is South Stream, in which countries like France and Italy also joined," Putin stated in Sofia.

"We have reached an agreement, and I would like to thank Prime Minister Putin for agreeing that the joint venture on South Stream will keep its funds in the Bulgarian Development Bank, which is 100% state-owned," Bulgarian Prime Minister Boyko Borisov said in turn.