Hundreds Line up in Sofia to Pay Homage to St. John's Relics 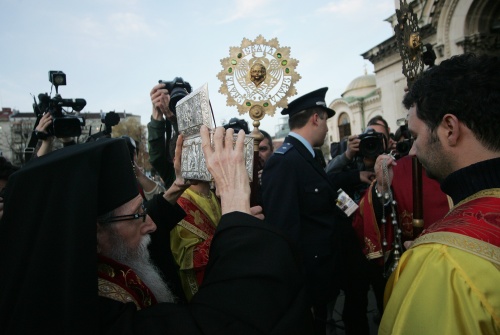 Pilgrims and clergy have been flowing to the Alexander Nevsky cathedral in Sofia since arrival of the relics of St. John the Baptist on Friday. Photo by BGNES

A long line of Sofia residents and visitors has formed Saturday on Saint Alexander Nevsky square in front of the cathedral under the same name where the relics of St. John the Baptist are now on display.

The relics, unearthed this summer near Sozopol on Bulgaria's southern coast and purported to be St. John the Baptist, arrived at 5 pm Friday and will remain in Sofia for three days.

The authorities have created temporary measures to organize traffic in the downtown area (already hindered by the visit of Russian Prime Minister, Vladimir Putin), and to help the long line move faster. Only one of the cathedral's entrances is open, while the line has circled the building several times.

Police say people are waiting calmly and patiently. In addition to police, three ambulances, a fire truck and a Civil Defense car are on standby.

The pilgrims have been flowing to the cathedral since the relics' arrival Friday.

Putin is also expected to pay homage to the display, despite his busy schedule.