Round of Crucial Energy Talks Starts in Sofia 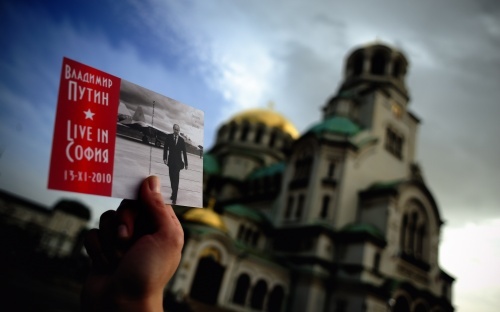 Vladimir Putin's supporters in Bulgaria came up win an unusual idea how to show their hospitality. They printed cards with an inscription, patched against a red background, reading: “Vladimir Putin live in Sofia, November 13, 2010.” Photo by EPA/BGNES

The Russian Prime Minister, Vladimir Putin, is arriving in the Bulgarian capital Sofia Saturday for a one-day visit on the invitation of Bulgarian counterpart, Boyko Borisov.

Bulgarian representatives in the talks include the two Deputy PMs – of Interior, Tsvetan Tsvetanov, and of Finance, Simeon Djankov, Foreign Affairs Minister, Nikolay Mladenov, the Minister of Economy and Energy, Traicho Traikov, of Environment, Nona Karadzhova, the CEO of the Bulgarian Energy Holding (BEH), Maya Hristova.

The official agenda includes talks between the two delegations, along with a private meeting between Borisov and Putin, and a joint press conference afterward for the signing of the reached energy agreements.

Borisov is hosting a lunch for his Russian counterpart afterward.

In a TV interview late Friday, Traikov informed the two documents to be signed relate to the "South Stream" gas line and only to the construction of new gas pipes on Bulgarian territory.

"Gas infrastructure in Bulgaria would remain the same – with 100% Bulgarian ownership and 100% of the now received transit fees for Bulgargaz," the Energy Minister pointed out.

Traikov further announced he expects the talks to lead to a 5% reduction of price of Russian gas for Bulgaria along with a discussion on the second Nuclear Power Plant (NPP) in the Danube town of Belene.

Also on Friday, Borisov stressed the talks' agenda is focusing on South Stream, while the topic of Belene has not been put on the table in prior phone calls between him and Putin.

Borisov made the statement as a response to declarations of Members of the Parliament from the right-wing Blue Coalition the cabinet is ready to sign key energy contracts for South Stream and Belene that would tie the country with Russia without information on their cost and feasibly.

In the wake of Putin's visit, the Russian newspaper, Vremya Novostei, published an article declaring their PM is arriving to Sofia to witness in person Bulgaria's surrender to South Stream and revealing Italian PM, Silvio Berlusconi, had promised Putin to work up a diplomatic deal with Borisov, which the latter firmly denied.