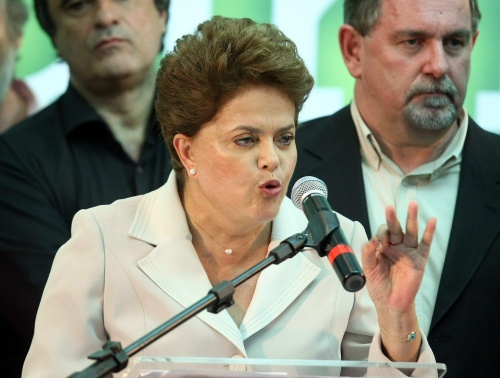 Macedonian daily newspaper "Dnevnik" has issued an apology and a correction for misquoting an article of Novinite.com (Sofia News Agency) about the Bulgarian origin of Brazil's new President, Dilma Rousseff.

On November 4, 2010, the Editorial Team of Novinite.com (Sofia News Agency) issued a statement of protest and alerted its readers, the editors of the Macedonian daily Dnevnik, and the paper's publisher, the German media group WAZ, that the Dnevnik publication from Wednesday, November 3, 2010, entitled "Maiden from Pirin Region Leads Brazil" misquotes an article of Novinite.com (Sofia News Agency) about the origin of Brazil's new President Dilma Rousseff.

The Dnevnik article stated twice that Dilma Rousseff's Bulgarian father, Petar Rusev, is from Gabrovo, in the region of Pirin Macedonia, confusing a small village in Southwestern Bulgaria with the city of Gabrovo in Central Bulgaria, which is the actual birthplace of Dilma Rousseff's father.

On Friday, November 12, 2010, with respect to this case, the Editorial Team of Novinite.com (Sofia News Agency), received the following letter of apology from the editorial staff of the Macedonian newspaper Dnevnik:

Dnevnik daily newspaper deeply apologizes for the unintentional error in the published article about the President of Brasil, Dilma Rouseff. The staff, management and the editors promptly issued an apology and a retraction for the error and immediately started an internal investigation to determine the cause of the error.

On some web-portals and social networks, there were articles suggesting that the ancestors of Ms. Rouseff were ethnic Macedonians from Bulgaria, from the city of Gabrovo. This fact was deemed attractive for publishing in our newspaper.

We quoted the Novinite.com (Sofia News agency), and its Internet portal www.novinite.com because we had confidence in this reputable Bulgarian news agency.

This, regretfully, resulted in a completely misleading headline of the article.

In the published apology and retraction we stated, and we repeat it now, that it was a completely unintentional error (honest error), without a slightest intention to do any harm to the Bulgarian news agency, nor with a tendency to offend anyone.

After the internal investigation, we will implement appropriate disciplinary sanctions for every journalist and editor who influenced the error.

The Correction published in Dnevnik

The article wrongly quotes the Bulgarian News Agency Novinite, and leads to a conclusion that the city of Gabrovo and the village of the ancestors of the new president of Brasil, Dilma Rouseff is in Pirin Macedonia.

Gabrovo is not in Pirin Macedonia, and it is clearly stated in the quoted article of the Bulgarian News Agency: "The hometown of Rousseff's father, Gabrovo, is in central Northern Bulgaria and nowhere close to the Bulgarian region bordering Macedonia (so-called Pirin Macedonia)" .

The wrongly quoted article with the headline creates an impression that Dilma Rouseff is from Pirin Macedonia. We appopogize to our readers for the error.

It is our understanding that honest mistakes can happen, especially in an age in which information and news travel instantly around the globe. We appreciate deeply the timely reaction of our colleagues from the Dnevnik, a major newspaper and media outlet in the Republic of Macedonia, as well as their willingness to correct their mistake.

However, there is one point in the letter of apology by the Macedonian newspaper Dnevnik, with which the Editorial Team of Novinite.com (Sofia News Agency) does not agree - the lurking suggestion that people from Southwestern Bulgaria, or the so called region of "Pirin Macedonia", have "ethnic Macedonian" identity, and that, if Dilma Rousseff's family had really been from Southwestern Bulgaria and not from Central Bulgaria, then it would have been correct to suggest that she is of an ethnicity different from Bulgarian.

While there might be a certain number of people in the Republic of Bulgaria who declare themselves to be ethnic Macedonians, which is their right, their number is negligibly small, and it is perplexing how it would be justified to declare a person "an ethnic Macedonian" only because they come from a place in Southwestern Bulgaria.

The entire issue about a "Macedonian minority" in Bulgaria is a matter of the official bilateral relations between the Republic of Bulgaria and the Republic of Macedonia; therefore, we believe that any suggestions and claims in that respect should be left to the official state institutions of the two sovereign countries.

The Editorial Team of Novinite.com (Sofia News Agency) would like to close the matter by expressing once again gratitude to the staff and publishers of the Skopje-based Dnevnik daily for their apology and correction. We hail all efforts on part of media outlets around the world to provide correct and unbiased information for the sake of their readers/viewers/listeners, and to uphold high ethical standards in their relations with each other.