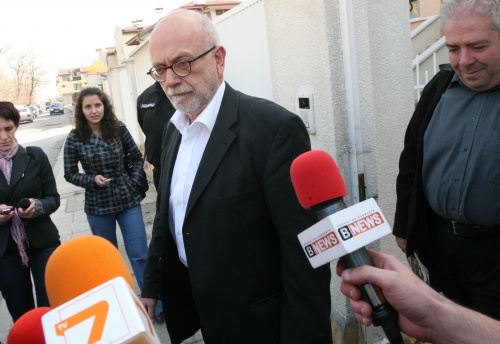 German top investigative journalist Jurgen Roth paid a visit to the home of controversial businessman, ex-secret agent and alleged crime boss Aleksei Petrov on Friday, a day after calling him one of "Bulgaria's new demons".

"I won't make any comments, I need to check my documents," Jurgen Roth told journalists after leaving Petrov's home.

The safety of the German publicist, who has steered clear of Bulgaria over fears for his life, was secured by two cars of the National Security Agency.

Aleksei Petrov also refused to disclose any details about the meeting.

"That was just one interview," Petrov told journalists, while standing on the other side of the fence of his home, pretending not to hear their questions about whether he has handed to Roth any documents.

A day earlier, speaking at a press conference in Sofia, where he presented the Bulgarian edition of his new book "Gangsterwirtschaft" ("Gangster Economy"), Jurgen Roth said:

"We could rightly say that Georgi Parvanov, Aleksei Petrov and Rumen Petkov are the new [Bulgarian] demons. Let's take a look at your president – he has the past of an agent in the [secret] services. You also have Aleksei Petrov, whose past is also very controversial. You have Rumen Petrov. They all now want to set up a new party."

The event came a month after Roth was cleared of allegations of slander in his book about organized crime in Bulgaria, entitled "Bulgaria's New Demons", by former Interior Minister Rumen Petkov.

Since his release under house arrest in early October, Aleksei Petrov aka the Octopus, who is sued for various criminal activities, has lamentably emerged at the center of the Bulgarian political scene with various figures exchanging accusations that they are bound to him.

Petrov went as far as to say that he might run for President in 2011, in a move that might blow up domestic politics.