St, John The Baptist Relics to Arrive for Display in Sofia 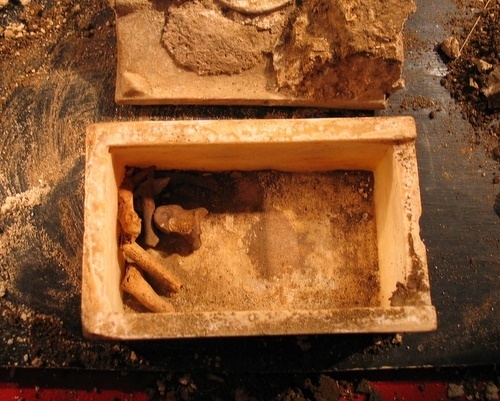 The remains, purported to be John the Baptist, including a skull fragment and a tooth, were uncovered in July during the excavation of a fourth-century monastery on St. Ivan Island, off Bulgaria's Black Sea coast. Photo courtesy by K. Popkonstantinov

The relics, unearthed this summer off Sozopol on Bulgaria's southern coast and purported to be St. John the Baptist, will be displayed in the capital Sofia for three days as of Friday.

The relics are expected to arrive on Saint Alexander Nevsky square around 5 pm and will be welcomed solemnly by the clergy, politicians and citizens, according to a statement of the Holy Synod.

A mass will be served for the health and welfare of the Bulgarian people in fornt of the relics, which will be displayed at the patriarchal cathedral, giving opportunity to the faithful to take a glimpse of the relics.

“If there is a great interest from pilgrims, the relics will mist probably remain longer in Sofia. The relics come for Sofia citizens, as well as for Putin,” Bulgaria’s Diaspora Minister, Bozhidar Dimitrov, said, referring to the official visit of the Russian PM Vladimir Putin this weekend.

The remains believed to be John the Baptist, including a skull fragment and a tooth, were uncovered at the end of July during the excavation of a fourth-century monastery on St. Ivan Island, off Bulgaria's Black Sea coast. They were in a sealedreliquary buried next to a tiny urn inscribed with St. John's name and his birth date.

Much of the criticism has been directed at Diaspora Minister Bozhidar Dimitrov, whose confident claims about the relics and their potential for the county's economic recovery provoked criticism from leading archaeologists.

In response, Dimitrov made a vulgar expletive at the critics of what are believed to be relics of John the Baptist, prompting calls for his resignation.

joOfficials of the recession-hit country believe that the purported relics will give a big boost to tourism, drawing believers from neighboring Orthodox Christian countries to this nearby resort town. They are looking at the relics to promote religious tourism, hoping for an economic salvation and miracle in polls.