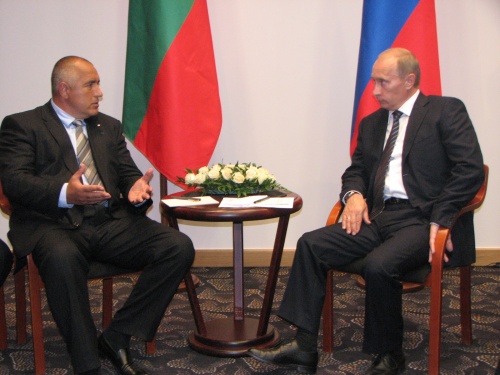 Borisov and Putin are set for a crucial meeting on Saturday, November 13, 2010. Photo by BGNES

Bulgaria has finally dispelled any doubts about its commitment to the Russian-sponsored South Stream gas transit pipeline as the Borisov Cabinet decided to sign a shareholders' agreement with Gazprom for the construction of the project's Bulgarian section.

During its regular meeting on Wednesday, the government decided in favor of the setting up of a joint venture with Gazprom for the construction of the Bulgarian route of South Stream.

The actual agreement is to be signed during the upcoming visit of Russian Prime Minister Vladimir Putin to Sofia on Saturday, November 13, 2010.

Gazprom and the Bulgarian Energy Holding (BEH) each will have a share of 50% in the joint venture, which will manage the construction and the operation of the Bulgarian section of South Stream.

Last week, the Bulgarian Energy Holding and Gazprom have announced the start of a tender to select a company to carry out a preliminary investment study for the construction of the South Stream gas pipeline on Bulgarian territory.

The start of the tender was announced Thursday by the press office of the Bulgarian Energy Holding, a state-owned mega-structure.

The long-anticipated first specific step towards the realization of the Russian-sponsored project South Stream came after months of uncertainty about the fate of the project amidst rough talks between the Borisov Cabinet in Bulgaria and the Putin-led leadership in Moscow.

Russian Prime Minister Vladimir Putin will visit Sofia on November 13, 2010, for talks not just on South Stream but also on other large-scale energy projects – the Belene nuclear power plant and the Burgas-Alexandroupolis oil pipeline.