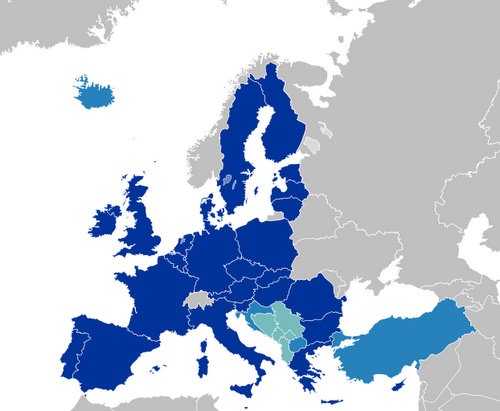 Macedonia has not been granted a date for the beginning of its EU accession negotiations despite its hopes about the EU progress reports presented by Enlargement Commissioner Stefan Fuele.

The progress reports on nine EU hopefuls – Croatia, Serbia, Montenegro, Macedonia, Albania, Kosovo, Bosnia and Herzegovina, Turkey, and Iceland - were adopted Tuesday night by the European Commission making it clear that only Croatia and Iceland are tangibly close to joining the Union.

Turkey and the other Western Balkans states appear to be facing grave issues in their bids to join the EU, as outline by the progress reports.

Bulgaria's immediate neighbor Macedonia is set back in its EU efforts by its name dispute with EU member Greece, Commissioner Fuele has pointed out.

Macedonia is found to have fulfilled "the political criteria" for EU membership but dialogue among political actors, judiciary and public administration reform, the fight against corruption, freedom of expression, and improving the business environment remain issues of criticism.

With respect to Macedonia's relations with Bulgaria the progress report states that they remain good but that some ethnic issues continue to be a cause of concern, the BNR reported.

Croatia, on the other hand, which hopes to conclude its accession talks in 2011, is still said to be falling short of certain EU standards. Fuele has made it clear that it has to make further progress in order to avoid the employment of a "Cooperation and Verification Mechanism" after its accession, which has been in place since 2007 to track the post-accession progress of Bulgaria and Romania.

Iceland is found to be making rapid progress but Commissioner Fuele has warned that its citizens need to be better informed about what the EU membership entails.

The European Commission has further recommended that Montenegro receive status of an EU candidate country as "recognition of its achievements" but the report also demands further progress.

Serbia has been found to be in a good position to bid for EU membership but is urged for further judicial and administration reforms, and efforts against organized crime and corruption. What is more, Serbia faces political setbacks with respect to the recognition of Kosovo, and the search for two war crimes suspects demanded by the Hague Tribunal.

While encouraging the efforts of other Western Balkans nations – Albania, Bosnia and Herzegovina and Kosovo – the progress reports have made it clear that they are far from coming closer to membership in the foreseeable future.

As far as Turkey is concerned, the Commission progress report has criticized its political reforms in addition to the problems in the relations between EU member Cyprus and the Turkish government.

"Pressure on newspapers, court cases against journalists and the disproportionate ban of numerous websites are unacceptable in a free pluralistic society," said the European Parliament's rapporteur on Turkey, Ria Oomen-Ruijten, in a statement.

All in all, Commissioner Fuele has defended the importance of enlargement for the EU arguing it is in the EU's self-interest because of its transformative power for the candidate countries.

"In this climate of economic uncertainty, people may ask, 'Why does enlargement matter?' Enlargement matters because it reinforces peace and stability in Europe. Enlargement makes the European Union a safer place with its focus on consolidating the rule of law while promoting democracy and fundamental freedoms across the aspirant countries, who are our closest neighbors," Fuele declared.