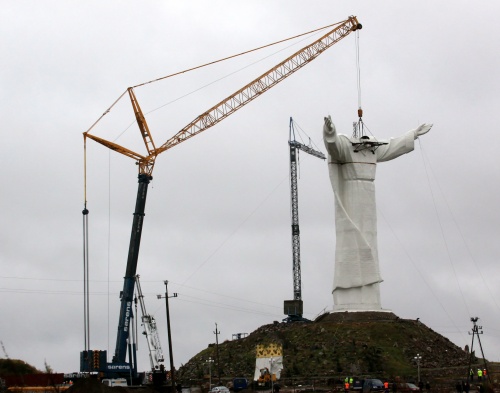 The Jesus Christ statue in Poland, shortly before its completion on Saturday. EPA/BGNES

The Polish town of Swiebodzin has completed the construction of what it is believed to be the largest statue of Jesus Christ in the world.

The building of the statue was finished Saturday with the addition of the head; the project cost USD 1.45 M, and the money was raised from donations.

Even though international media cited locals with contradictory figures about the precise measurements of the statue, it is said to be 51 m in height including the mount it is placed on, and is thus taller than the statue of the Christ the Redeemer in Rio de Janeiro, Brazil, which is 38 m.

The town of Swiebodzin has a population of 22 000; thanks to the statue, it hopes to draw Catholic pilgrims from around the world.