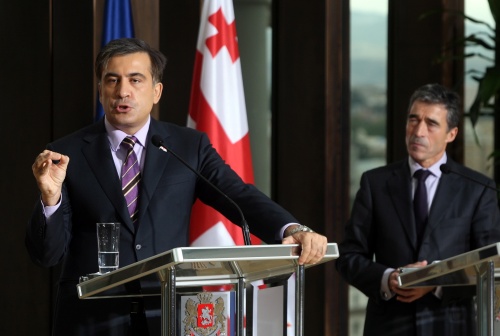 Georgia and Russia got tangled in a new spy plot after the South Caucasian country busted 15 allegedly Russian spies on Friday.

The detainees include six pilots from the Georgian Air Force; 13 of them are kept in jail while 2 have been released under plea bargains, the Georgian Interior Ministry said.

Of those, ten have been charged with espionage and three – with working for the intelligence service of a foreign country. Nine are Georgian citizens and four are citizens of the Russian Federation – three businessmen and a liaison officer for the Russian Main Intelligence Division.

Georgia said it discovered "several dozens" of people who were covertly working in Georgia for the Main Intelligence Division of the Russian Defense Ministry.

The Georgian authorities claim they uncovered the Russian spy plot by implanting an officer of their own in the Russian service.

"In order to carry out espionage activities, Russians gave him special computer hardware and software for encrypting the exchanged information. This person handed over both the hardware and the software to the counter-intelligence department of the MIA of Georgia, thereby making it possible to identify their functioning mechanisms," the Georgian Ministry of Internal Affairs said as cited by CNN.

Russia has described the arrests as a "farce" and a "provocation."

"[Georgian President] Mikheil Saakashvili's regime suffers from chronic anti-Russian spy mania. Over recent years the Georgian government has repeatedly resorted to fabrication of such scandals, cynically hoping to receive domestic or foreign dividends," the Russian Foreign Ministry said in a statement as quoted by RIA Novosti.

"The arrested in Georgia people have no connection with Russian security services," a source in Russian law enforcement agencies said.

The Russian government believes the "attempt at provocation" on part of Georgia will be a failure.

This is the latest in a series of spy plots between the two countries since they fought a five-day war in 2008.

Two years ago, Georgia detained four Russian military officers and 12 other people on charges of spying. They were subsequently handed over to Russia.

In March 2010 a Russian military court in the North Caucasus sentenced a Georgian national and two Russians to 11-15 years in jail on charges of treason and espionage.

Long-standing tensions between Russia and Georgia, chiefly over the breakaway Georgian regions of South Ossetia and Abkhazia, erupted into conflict in August 2008. Russia recognized the two republics as independent shortly after the war.