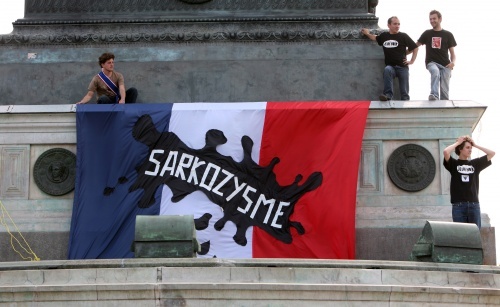 Protesters show the French tricolour reading 'Sarkozysme' during a protest against xenophobia and the French government's immigration and security policy, in Paris, France, 04 September 2010. Photo by EPA/BGNES

French authorities have deported more than 21 000 people since the beginning of the year and nearly 1 600 were Bulgarian, according to official figures, in stark contrast with the data of the Bulgarian government.

According to figures presented by Immigration Minister Eric Besson to the National Assembly Wednesday, of the 21,384 people deported from France in the first nine months of 2010, some 13,000 were Romanian and Bulgarian.

15 455 of these were forcefully deported, including 6562 Romanian and 910 Bulgarian nationals.

Bulgaria's Foreign Ministry has announced that fewer than 100 Bulgarian nationals have returned voluntarily from France since the beginning of the year after being given a plane ticket and 300 euros in cash.

French authorities have claimed that the responsibility for integrating Roma people rests on their home countries, not on the EU country in which they chose to reside. They also claim that Roma returns are completely voluntary.

Bulgaria's government has been keeping a low profile over France's Roma crackdown, apparently fearing that tension with Paris might put at risk its Schengen accession.

The country hopes to join the EU's border-free zone by the end of 2011 as scheduled and the official line is that recent expulsions of mostly Romanian and Bulgarian Roma from France is irrelevant to that process.

The local media however, where the deportation made front-page news, have accused the government of shying away from an open confrontation with France, for fear this could jeopardize its Schengen accession, touted as one of the main priorities of Prime Minister Boyko Borisov.