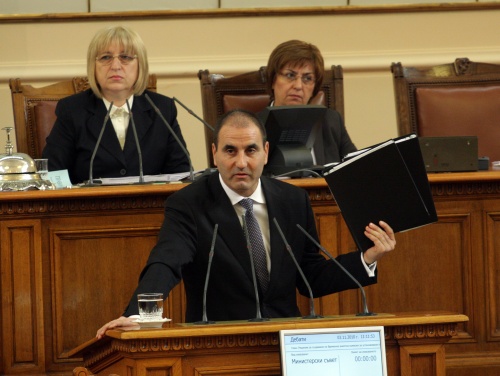 Bulgaria's Deputy PM and Interior Minister, Tsvetan Tsvetanov, appeared before the Parliament to give explanations about properties purchased after he become actively involved in politics. Phot by BGNES

Bulgaria's Deputy Prime Minister and Interior Minister, Tsvetan Tsvetanov, declared BGN 362 000 in income between 2004 and 2009, in a public explanation about properties purchased in 2008.

Tsvetanov appeared before the Members of the Parliament Wednesday and spoke from the stand for 30 minutes, bringing two large files with documents, while the Bulgarian National Television and Radio aired the debates life.

The Minister came to the Parliament to offer explanations on the accusations of the conservative Order, Law and Justice (RZS) party that he had acquired the apartments through murky deals and undeclared income.

Despite earlier announcements of the Director of the National Revenue Agency, NRA, Krasimir Stefanov that the audit did not find any improprieties, RZS still insist a Parliamentary Committee probes the properties.

In conclusion, Tsvetanov thanked all those who "sent him back to nostalgic memories of his childhood by giving him the opportunity to talk about family inheritance," and asked them to sign themselves an agreement for NRA to check their assets.

According to the Minister, he made BGN 73 000 as part of the leadership of the now ruling Citizens for European Development of Bulgaria (GERB) party between 2006 and 2009; BGN 50 000 in the 14 months he worked as Deputy Mayor for Security in Sofia City Hall; BGN 20 000 since he became Minister, and BGN 2 300 when elected Member of the Parliament.

For the much debated consulting services, Tsvetanov declared BGN 40 000 for 2007-2009 and another BGN 19 000 in 2009, just before becoming member of the cabinet, paid to him for working a as consultant on security levels, crime, and protection of foreign investments in Bulgaria. He also consulted on systems for monitoring and control and the status of foreigners residing in Bulgaria.

Tsvetanov, again, refused to say, who exactly hired him and paid for those services.

With all these funds, he purchased a BGN 130 000 apartment in 2008 at a time when he had already being working for 26 years non-stop, as he pointed out. The transaction was made through a bank deposit subject to verification at any time. The other apartment, also bought in 2008 was acquired through a EUR 58 000, 20-year mortgage.

Tsvetanov further explained he received a gift from his in-laws of BGN 30 000, which were used for repairs and renovations of his village house, saying his father-in-law worked for the private business between 2004 until 2009, made BGN 82 300 and sold a house in the city of Gabrovo for BGN 10 000. Part of these funds were used to purchase in 2006 a BGN 46 000 apartment in Sofia, which has been transferred to his oldest daughter with the parents keeping their right to use it for life.

Tsvetanov and one of his Socialist predecessors at the Interior, Rumen Petkov, exchanged strong works, mutually accusing each other of ties with the underworld.

At the end the Minister thanked GERB and the far-right, nationalist party Ataka for their support and was sent off with a standing ovation by them.

RZS continued to insist on a parliamentary probe of Tsvetanov's properties on the grounds his wealth grew significantly after he became actively involved in politics.

The MPs rejected the request of the Conservatives to air life the debate on the special Commission and postponed it for Thursday.

The RZS MP, Emil Vasilev, one of the strongest opponents and accusers of the Minister lately made the calculation that with income of BGN 360 000 and all property purchases and all repairs, Tsvetanov's family was living on BGN 10 000 since 2004 until now, saying the Minister must teach Bulgarian people how to survive without eating.