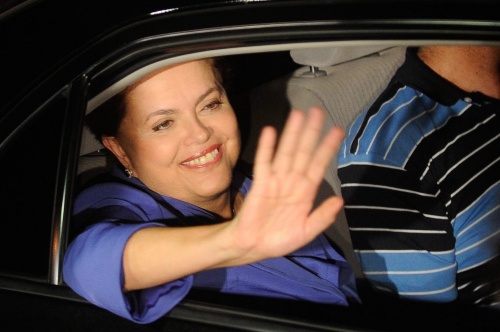 New Brazilian President Dilma Rousseff on her way to give interviews to national TV networks in Brasilia after being elected. Photo by EPA/BGNES

Brazil's newly-elected President Dilma Rousseff is a Macedonian, according to a Facebook group that has emerged after media-craze in Bulgaria regarding Dilma's Bulgarian lineage.

Apart from the responsibility of governing one of the worlds biggest countries and most important advanced emerging economies, Dilma Rousseff will now probably have to face the worry of just which South-East European nation she actually belongs to, as the Macedonian Facebook group appears confident about knowing more about Dilma's origin that she knows herself.

Dilma's father Petar Rousseff was born in 1900 in the Bulgarian town of Gabrovo, and then emigrated to Brazil in the 1940s, where he settled and founded a family.

This has provoked the extraordinary interest of Bulgarian media, some of which are writing that Brazil has now something of a Bulgarian President.

The newly-appeared Facebook group, called "Dilma Rusev vistinska makedonka" ("Dilma Rousseff is a True Macedonian") has only 54 members at present but might well grow to tremendous proportions.

The hometown of Rousseff's father, Gabrovo, is in central Northern Bulgaria and nowhere close to the Bulgarian region bordering Macedonia (so-called Pirin Macedonia).