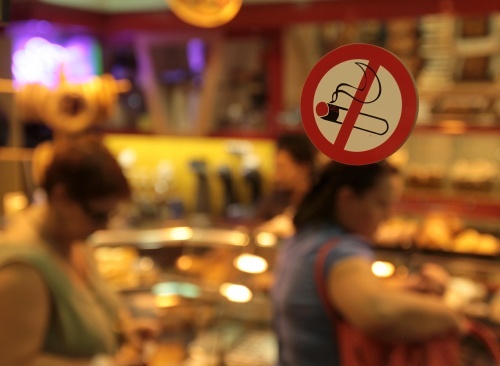 The town of Kyustendil is the only one in Bulgaria where the smoking ban in all public places was not eased at the beginning of June despite fears that this could hurt the tourism industry. Photo by EPA/BGNES

The mayor of the only Bulgarian town, which enforced a full smoking ban, has called on the center-right government to slash by half health taxes for non-smokers.

"This is how the state can provide incentives for the people to take better care of their health and not be a burden to the health system," Petar Paunov, mayor of Kyustendil, South-Western Bulgaria, announced on Tuesday.

"People, who don't smoke run a lesser risk of developing health problems and relieve the health system, which is the reason why they should pay lower taxes," he added.

In recession-battered Bulgaria, the government spends just 4.2%  of its GDP on health. All employed and self-employed Bulgarians are obliged to make monthly health insurance contributions of 8% of their income to the Health Insurance Fund.

The center-right government dropped earlier this year plans for a health tax hike, which was approved amid doctors' walkouts and in a bid to raise additional funds to support the ailing system.

The cabinet has been urged to back an alternative solution, which would make state officials, who are currently making no health insurance installments, dip deeper into their pockets.

The town of Kyustendil is the only one in Bulgaria where the smoking ban in all public places was not eased at the beginning of June despite fears that this could hurt the tourism industry during tough economic times.

All across the country smoking is allowed in separate smoking spaces inside restaurants, bars, coffee shops, railroad stations, airports, ports, and bus stations.

The owners of restaurants, clubs and coffee shops with an area less than 50 square meters, are given the option to decide if smoking would be allowed.