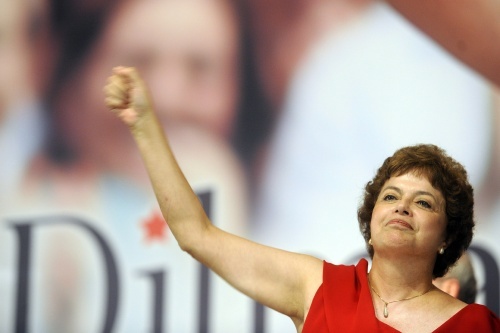 Dilma Rousseff's Bulgarian relatives hope she will come to Gabrovo as President of one of the world's greatest nations, and "recover her roots". Photo by EPA/BGNES

The citizens of Gabrovo, a hard-luck but endearing Bulgarian town at the foot of the central Balkans, where the father of Brazil newly elected president Dilma Rousseff was born, say her victory inspires them to change their lives for the better.

"In these times of crisis, it is very important that we seek occasions to take pride in, cheer up and find inspiration to change the world around us. Dilma Rousseff victory in the presidential race is just such an occasion," mayor Nikolay Sirakov said as he opened a photo exhibition, revealing details of the Bulgarian genealogy of Dilma Rousseff.

Rousseff's Bulgarian relatives say they hope she will visit Gabrovo as President of one of the world's greatest nations, and "recover her roots".

Peter Rousev was born in 1900 in the town of Gabrovo, but left Bulgaria for both economic and political reasons (he was a communist), looking for a better job and a brighter future.

A century later the small town in central Bulgaria has been caught up in the excitement of the presidential run-off in far-away Brazil, which Dilma Rousseff won.

True to their inventive and funny nature, the citizens of Gabrovo are already planning how to profit from Rousseff's link to the town, saying Brazilian investors may learn a lot from them about crisis management. The mayor has even suggested cooperation between Gabrovo spring carnival of humor and the carnival in Rio.