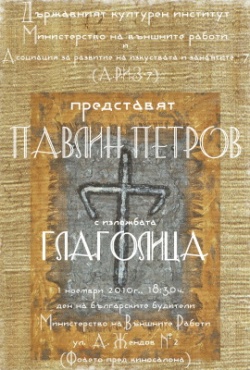 The Glagolitic exhibit was authored by artist Pavlin Petrov.

The Glagolitic alphabet, or Glagolitsa, was the original alphabet drafted by Byzantine monks St. Cyril and St. Methodius in 855 AD in their mission to spread the Christian word among the Slavs, even though the term for its name was not coined until the late Middle Ages – from the verb glagoliti meaning "to speak".

The Glagolitic alphabet was based on the three major symbols in Christianity – a cross, a circle, and a triangle.

St. Kliment Ohridski, the most important Bulgarian disciple of St. Cyril and St. Methodius, while serving the Bulgarian king Boris I later modified the Glagolitic alphabet in the late 9th century because he found its letters were too hard to write.

Based on it, he created the Bulgarian alphabet that he named "Cyrillic" after his teacher St. Cyril, which was introduced by the First Bulgarian Empire, and was then also adopted by other Slavic states in the south and east, including Serbia and Russia.

"The most real Bulgarian alphabet is the Glagolitic. It combines in itself a new beginning for Bulgaria and the Balkans and in many monasteries this alphabet is still kept alive. Each letter in this alphabet has a name of its own, and there is an idea enshrined in each of those names," Bulgarian Foreign Minister Mladenov said at the opening of the Glagolitic exhibit at the Cultural Institute of the Foreign Ministry before foreign diplomats.

Mladenov believes that the Enlighteners' Day, November 1, and the Day of the Slavic Script and Bulgarian Culture, and of St. Cyril and St. Methodius, May 24, are the two most genuine Bulgarian holidays.

Another exhibition about the Glagolitic alphabet was opened on Monday in Plovdiv by the Union of Plovdiv Artists.