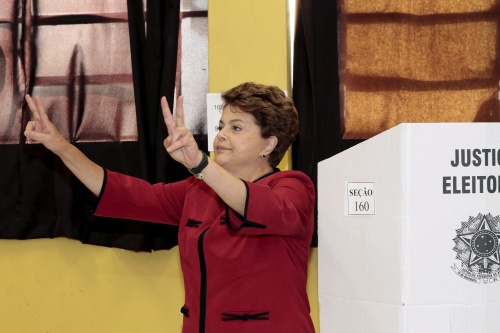 Dilma Rousseff pictured after casting her vote in the second round of the Brazil Presidential Elections. Photo by EPA/BGNES

Dilma Vana Rousseff, a Brazilian politician of Bulgarian origin, is the new President of Brazil, according to the country's central electoral commission.

62-year-old Rousseff of the Workers' Party has defeated Social-Democratic Party candidate Jose Serra in the second round of Brazil's Presidential Elections.

Rousseff grabbed hold of the Brazilian Presidency with 55.39% of the valid votes in the runoff, vs. 44.61% for Serra.

Dilma has thus begun the first woman to be President of the fifth largest country in the world in terms of territory and population, and the eighth largest global economy.

Dilma Rousseff is believed to have won the second round of the presidential elections primarily thanks to the votes of the poorer and middle class layers of the Brazilian society.

Brazil's outgoing President Luiz Inacio Lula da Silva himself won both of his terms in the elections in 2002 and 2006 after second-round runoffs. Prior to that Lula ran in every presidential elections since democracy was restored in Brazil in 1985.

A total of nine candidates ran for the presidency of Brazil, with other frontrunners including Marina Silva from the Green Party and Plinio de Arruda Sampaio from the Socialism and Freedom Party.

Rousseff, who has never held an elected office before, has herself acknowledged that her popularity is primarily the result of her promotion by extremely popular president Lula da Silva, whose two terms in office turned Brazil into a world-scale economic powerhouse.

Lula’s former cabinet chief Dilma Rousseff, who would be Brazil’s first female president, has vowed to maintain the social programs and the economic growth that has lifted 21 million people out of poverty since 2003, and has created 15 million new jobs. The Brazilian economy is expected to grow by 7.53% this year, the most since 1985, according to a recent central bank survey.

Until she was tapped by Lula da Silva, Rousseff was the president's little-known Energy Minister and, later, his Chief of Staff. She is also known for being a former Marxist guerrilla, surviving torture in the hands of the military dictatorship in Brazil more than three decades ago.

Rousseff's father, Petar Rusev, also know as Pedro Rousseff, was a Bulgarian leftist who emigrated to France in 1929, and then left for Latin America in the 1944.

More exciting coverage about Dilma Rousseff's win of the Brazilian Presidential Elections and her connection with Bulgaria read in Monday's Special Edition of the Sofia Morning News, and in the World, Interview, and Features sections of the Novinite.com (Sofia News Agency) website.