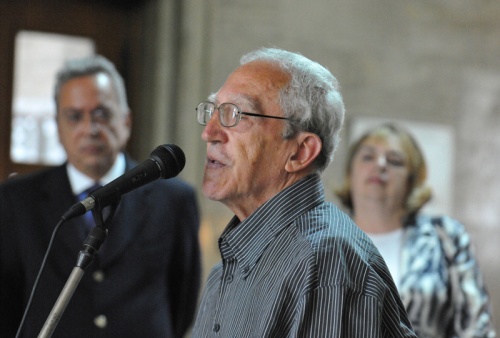 Professor Rumen Stoyanov (front) pictured here during the presentation of a Brazilian book at the National Library in Sofia. Photo by nationallibrary.bg

When were you in Brazil, and what is your acquaintance with the family of Dilma Rousseff?

This is when I had the chance to get in touch with Dilma Rousseff's mother, whose name is also Dilma. In 1973, I was in Belo Horizonte, the capital of the state of Minas Gerai, the city where Dilma Rousseff was born, where I opened a photographic exhibition about the nature and icons of Bulgaria as part of the efforts of the Bulgarian Embassy to promote Bulgaria in Brazil, regardless of the fact that back then Brazil was governed by a military regime, and Bulgaria was in the communist bloc.

During this reception, a woman came to me and told me that her late husband was a Bulgarian immigrant. We started talking, and she said her husband's names was Pedro – or Petar – Rousseff, and said also, quote on quote, "One of my daughters have problems with the police."

I did not ask her about that because I was afraid I could create troubles for her with the police authorities. She turned out to be the mother of Dilma Rousseff. She said she even knew a Bulgarian poetess. I guesses it was Elisaveta Bagryana because she I knew she had visited Rio de Janeiro for a meeting of the international PEN Club in the early 1960s. The woman was very surprised I knew the name of the poetess.

I asked her to come to the hotel where I was staying the next day, and she did. She told me about her late husband, the visit of poetess Bagryana to their home for a few weeks. She brought me two small black and white photos of that visit, one of them showing Bagryana only, and the other one showing Bagryana with their family.

She presented the photos to me, I am still keeping them, and she also showed me a book of Bagryana's poems dedicated to the family. I recorded everything and this is how the meeting ended.

After that, during my third term in Brazil in 2001-2004 I met Dilma Rousseff herself. Together with the then Bulgarian Ambassador Ventsislav Ivanov we went to see her as a member of the Brazilian government. We talked, and I used the chance to ask her about her mother; she told me her mother was still alive and lived in the same place in Belo Horizonte.

I remember that Dilma Rousseff explicitly said, quote on quote, "I am half-Bulgarian." Of course, this is no surprise for an immigrant society such as Brazil for somebody to talk about the origin of their family. For example, there are 25 million Brazilians who are of Italian origin.

Some time later, there was a performance in Brasilia of a Bulgarian piano duet, Genova and Dimitrov, I think they still live in Germany today. But they had a concert in the national theater in Brazil. Before that they had performed at the opening of the summer Olympics in Atlanta, USA, which is a testament to their class.

We talked again after the concert with Dilma Rousseff, who came to see the performance; this shows not only her interest in that kind of music, classical or "erudite" music, as it is known in Brazil but also in Bulgarian performers. We also met on a couple of other occasions.

Do you know anybody in Bulgaria related to Dilma Rousseff?

I used to know her half-brother. Lyuben-Kamen Rusev. Bulgaria has three honorary consuls in three different cities in Brazil. One of them is Joao Vaz, who is Bulgaria's honorary consul in Rio de Janeiro. He often comes to Bulgaria, and was actually just here a couple of weeks ago.

It was some time in 2005-2006 when he was in Sofia and asked me to help him get in touch with the brother of Dilma Rousseff, and we went to the home of Lyuben Rusev. Her brother spoke French because he had worked as an engineer in Algeria and Morocco. I interpreted even though the consul Vaz also speaks French, and even has French citizenship. But Dilma's brother moved very hard because of problems with his knees.

After that meeting I went to see him several times, and offered to help him and his wife, if they needed any help, since they did not have children. Somewhere around that time, he wrote a letter to his sister, and I translated it, and sent it.

One day I got a phone call from a Brazilian man, who told me he was in the Kempinski hotel in Sofia, and that I should go there because he had something for me.

I went to pick that thing and it turned out to be a sum in euro sent by Dilma Rousseff to her brother, without the brother ever having requested money from her. I can verify that as a translator of the letter.

I don't know if it is appropriate for me to reveal the exact sum but it was a certain amount of euro ending in three zeros. I gave it to her brother. I suppose that the consul told something to Dilma Rousseff, and she decided that it was good idea to help her brother out financially.

When did this happen?

It must have been in 2006 because the brother died in 2008. After that, one day, Mr. Rusev called me and asked me to translate another letter to his sister. I agreed, of course, and he said he would call again after he wrote it. He never called because he died shortly after that.

Ever since I have been having this remorse that I should have been thought of just going to his place, and writing the letter directly in Portuguese as he dictates to me. This is how a letter from Lyube Rusev to his sister Dilma Rousseff in Brazil remained unwritten and unsent. I am still very sorry that I did not think of going to his place rather than waiting for him to call.

What kind of a person was Dilma's brother Lyuben-Kamen Rousseff?

He had a very large library. He was a person who read freely French and Russian. When we met him with the consul, I realized that he was an intellectual. Even though he was a technician, an engineer by education.

He had participated in the construction of some of the most important river dams in Bulgaria. This successful career helped him because, even though during the communist regime, he was the son of an emigrant, he was still allowed to go work abroad.

He was a modest man who did not like to brag. But I am sure that he was proud with the fact that his sister was a high-ranking figure in a very important foreign country. It is not correct, as some Brazilian media mentioned, that he died in poverty. He was actually doing well as far as the living standards of pensioners in Bulgaria are concerned.

You know that Brazil ranks 5th in the world in terms of population, and 5th in area, and is the 8th largest economy. I hope that his sister Dilma wins the elections. As the Independent wrote, she will become the most influential woman in the world.

This will be good for both Brazil and Bulgaria, and since Brazil is a country with peaceful foreign policy, it will also be useful for the international community and the global development.

Apparently, nobody knows exactly why Dilma Rousseff's father left Bulgaria in 1929. Do you have to know anything about him?

I know what is publicly known – some say Petar Rusev left Bulgaria because of his leftist views, while others say he left for economic reasons. His son Lyuben-Kamen, who never met him, said Petar Rusev, just went bankrupt, and emigrated to France. After that he went to Argentina, and eventually settled in Brazil.

Poetess Elisaveta Bagryana, who visited his home, wrote, upon her return to Bulgaria, he so called Brazilian cycle with 9 poems.

For the time being, there doesn't seem to be any way of finding why Petar Rusev left Bulgaria.

How would you describe Dilma Rousseff as a person?

First, it is important to note that as a minister of energy and part of the government in the last years, Dilma Rousseff is herself partly responsible for Brazil's economic progress. I am certain she will manage to continue that trend because she already has a considerable government experience, and she is not the kind of person that engages in empty talk.

Even before joining the national government she had experience as energy minister in one of the most important states, Rio Grande do Sul. Dilma is a person who is a technocrat in the best sense of this term.

She is a cordial person, as are most Brazilians, who easily communicates with people, and does not play the demagogue, she names things the way they are, according to my personal impressions. Let's wish her success as Bulgarians.

Bulgarians tend to be proud of people who have indirect or vague connections to Bulgaria – for example, the inventor of the modern computer John Atanasoff. Do you think Bulgaria has the right to be proud of Dilma Rousseff?

I think that we have the full right to be proud with the Bulgarian origin of Dilma Rousseff because this does not in any way affect her Brazilian nationality.

I think that it is not only Bulgarians who are proud of people that fate has determined that they belong to another nation. You know how it works in the USA, where President Barack Obama is the most important recent example. All of Africa is proud with Obama's African origin, with nobody questioning his belonging to the American tradition. I think this is the same case.

You represented Bulgaria in Brazil for a long time. The two countries don't appear to have much interaction. Where could the impetus for development of the Bulgarian-Brazilian ties come from, other than the election of a president of Bulgarian origin?

Unfortunately, the economic ties between Bulgaria and Brazil are not on a very high-level when one considers Brazil's potential. The major obstacle is not geography as many unfoundedly claim because if we get a map, we will see that Brazil is not further than Japan or South Korea with whom we have much better ties.

Geography is no longer decisive. China is an example for that. I think that the major obstacle for Bulgaria and Brazil is the lack of awareness and knowledge of each other. For example, we in Bulgaria know that Brazil is undergoing a progressive development but we don't know what exactly they are doing. We need long-term efforts in that direction.

I hope that your media, Novinite.com (Sofia News Agency), could also contribute to the expansion of these ties as an intermediary in English, because Brazilians won't rush to learn Bulgarian.

I wish the best of luck to Mrs. Rousseff, and hope that we will see her in Bulgaria some day.